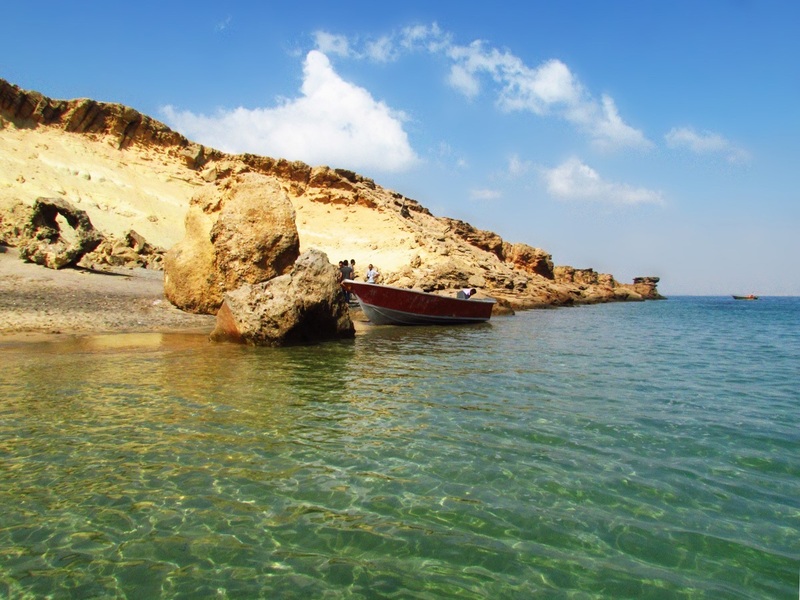 People who travel a lot know the fact that the nature offers its own beauties in every season and winter is a fascinating season. Even the cold of winter cannot prevent a true nature-loving adventurer from traveling. Here are some winter destinations in Iran for you.

Qeshm is one of the largest magnificent islands in Iran, which attracts many tourists every year. Qeshm Island has a hot climate with high humidity, but the temperature is different during different seasons. This has made the island among the most pleasant winter destinations in Iran. You do not need to go to this island in warm clothes in winter. Also, we suggest you avoid Qeshm marine tourism areas because the tide is very high in winter. One of the sights of Qeshm is called Namakdan Cave, which is 90 km away from Qeshm. The salts in this cave look like icicles. You may need a flashlight in some parts of the salt cave because it is completely dark. The Star Valley is one of the most amazing regions of the Middle East. This valley is located 5 km south of Qeshm. The ancestors who lived in this area believed that one day a star fell from the sky to the island and created these strange rocks. Do you like crocodiles? If yes, you can visit Crocodile Park in the west of Qeshm Island! 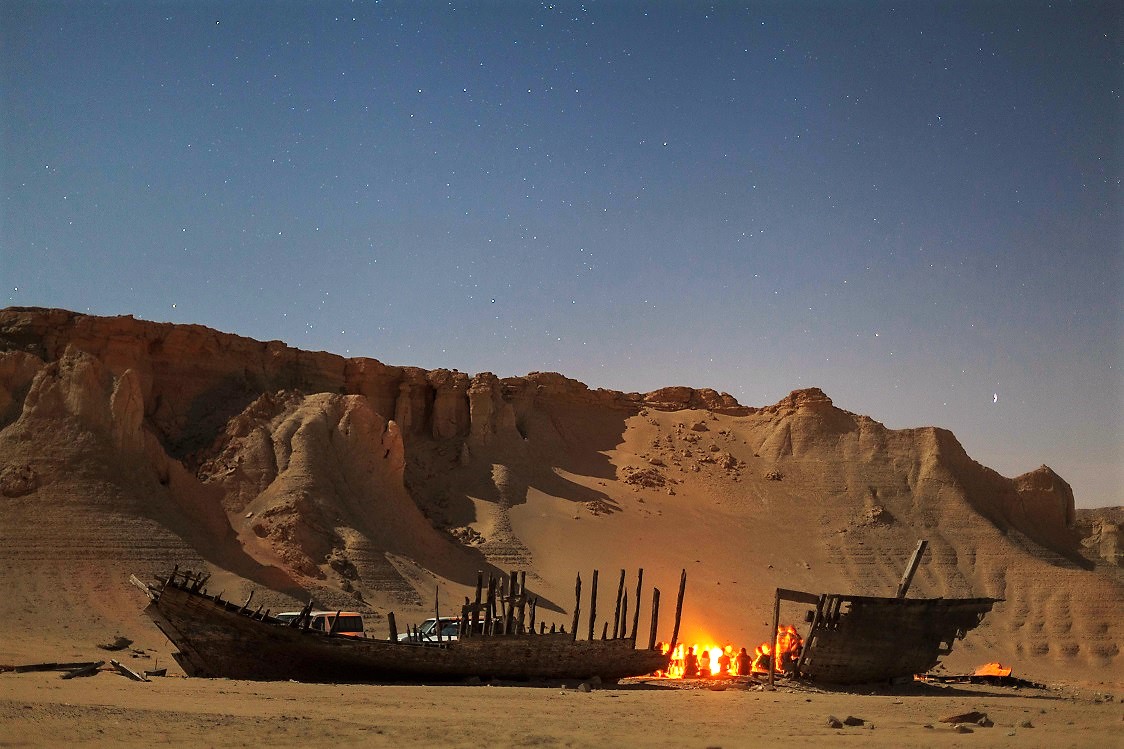 Qeshm, the largest Island of the Persian Gulf.

The pleasant weather of Kish Island in winter, without the bothersome heat of summer, makes entertainment and sightseeing very attractive to visitors. Kish tourist attractions are not limited to beautiful nature. You can also find historical monuments in Kish. The underground city of Kariz is one of the historical attractions that you should not miss; A ten-thousand-square-meter city, parts of which have now been renovated and are open to the public. The Greek ship, which has long been a symbol of Kish Island, is another historical attraction of the island. The ship was built in 1322. Due to the foggy weather and the absence of a lighthouse, it got stuck near the island.

Chabahar is one of the places that no one should miss visiting. This city, which is located in the southeast of Sistan and Baluchestan province, is also the only ocean port in Iran. The first attraction you can visit is Lipar Lagoon. The wetland located in Lipar Valley is also called Pink Wetland. With its pink color, it has created an eye-catching view. It is also a great place for those who love bird watching. One of the amazing attractions of Chabahar is the miniature or Martian mountains. The juxtaposition of the sea and the mountains makes it look like a painting. Their conical shape and red color make them known as Martian mountains! Mangrove forests, Portuguese castles, rocky beaches are among the sights of Chabahar, and you will fall in love with this port! 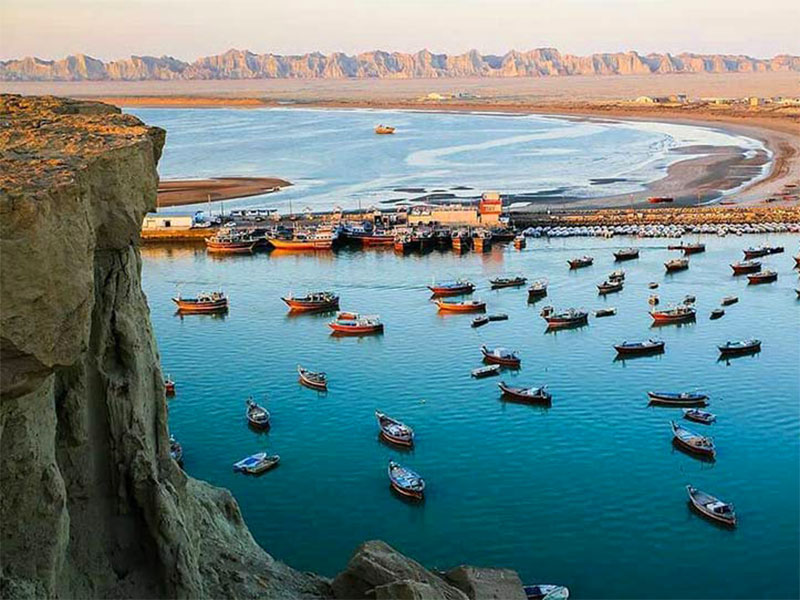 Khuzestan (Ahvaz) province has a mild climate and is among he best winter destinations in Iran. So, this season is the best time to visit this province. Ahvaz can also be called the city of bridges; a city with ten bridges built on the Karun River! You can also try boating on this river. Ahvaz holds the record for the number of bridges in the Middle East. The white bridge is one of the most important symbols of Ahvaz. The Moein-altojar building with traditional and old architecture is considered one of the best and most attractive tourist destinations in Ahvaz. In fact, this building is located near the White Bridge, so you can go there after visiting the bridge. Abdul Hamid Bazaar is among the most popular bazaars in Ahvaz, which dates back to more than a century ago. In ancient times, this bazaar was suitable for wealthy people, but today, everyone can buy stuffs from here.

Kerman has many attractions and is a historic city with historic gardens, castles, and inns. Shazde Garden in Mahan, built during the Qajar period, is one of the most famous examples of Persian gardens, which is also registered in the UNESCO World Heritage List. Among the main elements of Shazde garden in Mahan, you can visit the main mansion, the royal mansion, the pools, the baths, the fountains. Also, there is Ganjali Khan Mosque located next to Ganjali Khan Palace and, it has attracted the attention of many tourists due to the delicacies used in its structure. 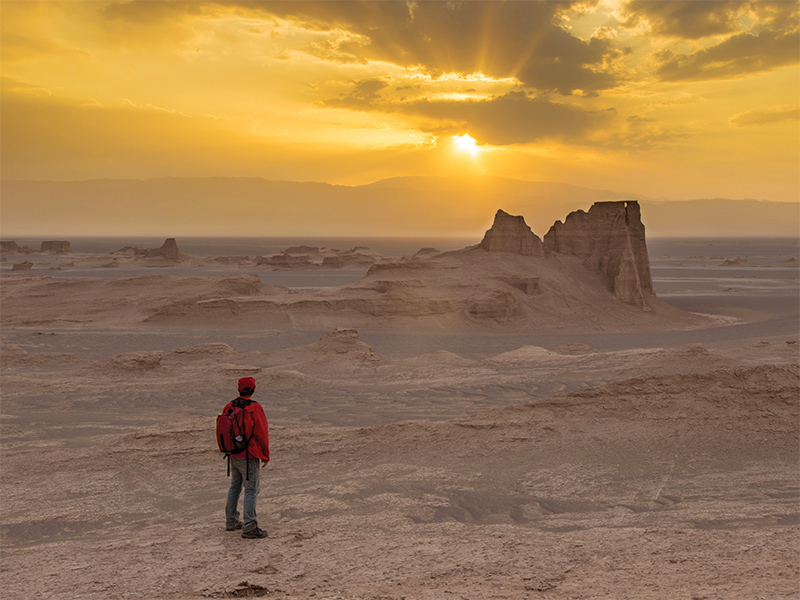 The city of Yazd has many historical and archaeological monuments and is considered the second historical city in the world. One of the beautiful historical monuments of Yazd in winter is the Meybod glacier or Yakhchal. This glacier is located fifty kilometers from Yazd in the city of Meybod. It is made of clay and mud and dates back to the Safavid period. Yazd Mosque is another spectacular place in Yazd that is a masterpiece of Iranian mosques in plastering and tiling. You can also visit Dowlatabad Garden. The trees of this garden create a pleasant view for you and the whole city is an amazing winter destination in Iran. 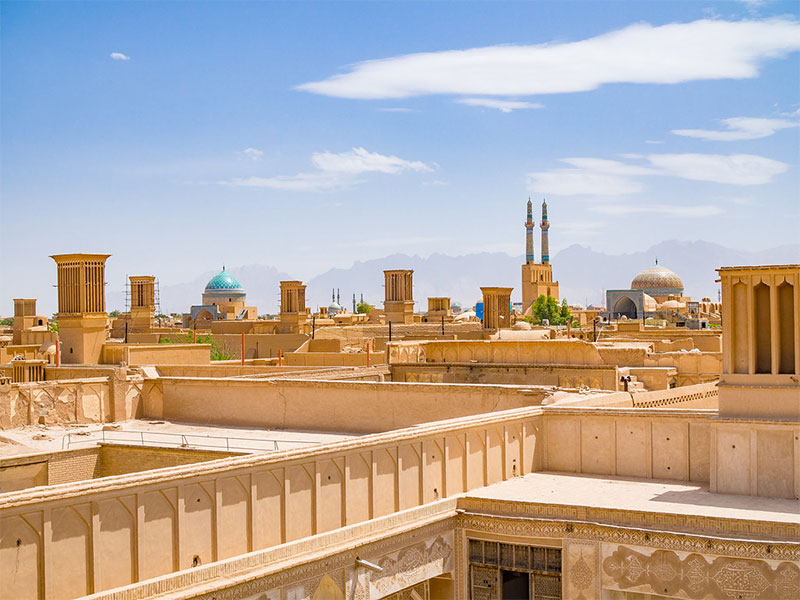 Winter destinations in Iran: the gorgeous city of Yazd.

Shiraz is a good choice for snow lovers in winter, and you can experience a memorable winter in its snowy mountains. Among the natural areas of Shiraz, we can mention Sepidan ski resort and Barm Firooz lake. The cable car and ski slope near the beautiful and famous Margon waterfall have made it popular and attract domestic and international tourists to the ski slope. Maharloo Lake in Sarvestan is undoubtedly one of the most beautiful places in Iran. This beautiful lake hosts migratory flamingos from mid-February to March, and its red color will surprise you! The weather is not very cold in winter, and you can walk in the lovely courtyards of Shiraz’s gardens.