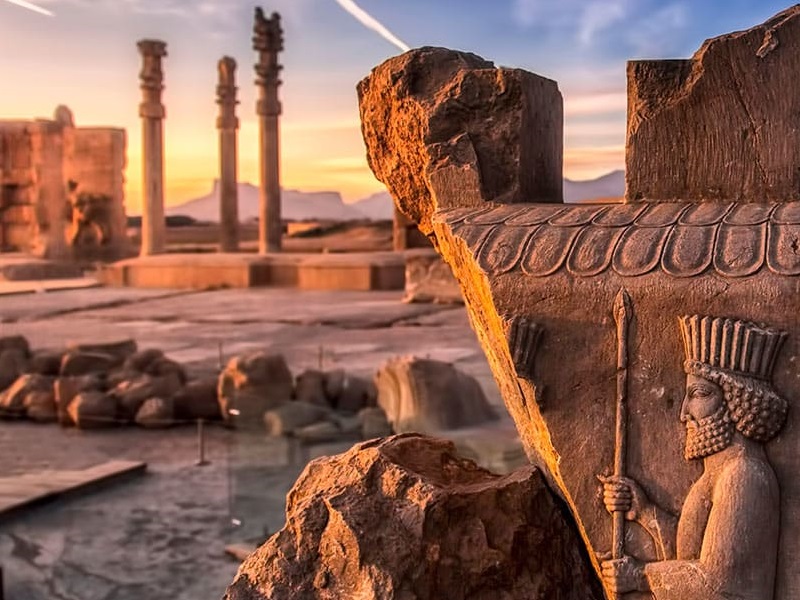 Have you heard about the World Heritage sites? Well, these sites possess cultural, historical, and scientific significance to a particular country and are believed to have an important value to humanity; therefore, these landmarks are currently under the protection of UNESCO. Iran, a vast country rich in cultural and historical sites, offers 26 World Heritage Sites by UNESCO, various customs, instruments, sites, and natural monuments. Here we are going to introduce you to some of the best UNESCO World Heritage sites in Iran, which you should certainly add to your list of “places to visit”. Keep reading to find out about the exceptional historical sites of Iran.

Chogha zanbil is a colossal pyramid-shaped structure also known as the “Ziggurat” found in the Southwest of Iran in Khuzestan Province. A ziggurat is an ancient massive building made of square-like receding levels of a terraced construction dating back to 2500 to 4200 years ago. Chogha Zanbil belongs to the Elam civilization in ancient Persia from 3000 to 539 BC and in the Elamite language, the name of this Ziggurat translates to “basket mound” because it’s shaped like a large basket. The magnificent temple was established by Untash Napirisha, the King of Elam in 1300 BC as a dedication to the Great Elam god called “Inshushinak”. Among the other Ziggurats, Chogha Zanbil is the only compound left intact and for this reason, it is recognized as a very popular historical site in Iran visited by thousands of people every year. This temple was the first Iranian site marked as a UNESCO World Heritage site in 1979.

The majority of foreigners might be familiar with this prominent spot in Iran. The symbolic ruins of Persepolis are found in almost any book referring to Iran’s history, so you might have come across a picture of it if you’ve read about Iran. Persepolis also called “The Throne of Jamshid” was founded in the 6th century BC by the Achaemenid Empire, the first Persian Empire and it was the capital of Persia, now the modern Shiraz city. There are 5 different palaces with separate grand entrances along with soaring pillars and illustrations of the kings and lions carved on the stone walls. The entire structure is built on a high-walled platform. Originally, Persepolis was constructed by the order of Darius I, but it was later burnt down by Alexander the Great in 330 BC. This spectacular remnant of the Persian Empire is highly praised by the Iranians and is acknowledged as a crucial Heritage of Iran. Until now, numerous visitors come to see the beautiful Persepolis and admire its splendor.

The tomb of Cyrus the Great, king of the first Persian Empire was erected in the 6th century BCE and it was named Pasargadae meaning a “Protective club” in Old Persian. This renowned tomb was once the first capital of the empire which now is the city of Shiraz. Annually, many Iranians come to see this place to cherish King Cyrus. The mausoleum’s architecture is a mixture of the Persian, Egyptian, and Greek styles of construction and is one of the most allegorical ruins of the Achaemenid era. Like Chogha Zanbil, Pasargadae has a similar form to a Ziggurat (a square-shaped pyramid found in ancient Persia) for the tomb is built upon receding large rocky stairs. If you’re fond of archeological sites in Iran, Pasargadae is a wonderful place to stop by. 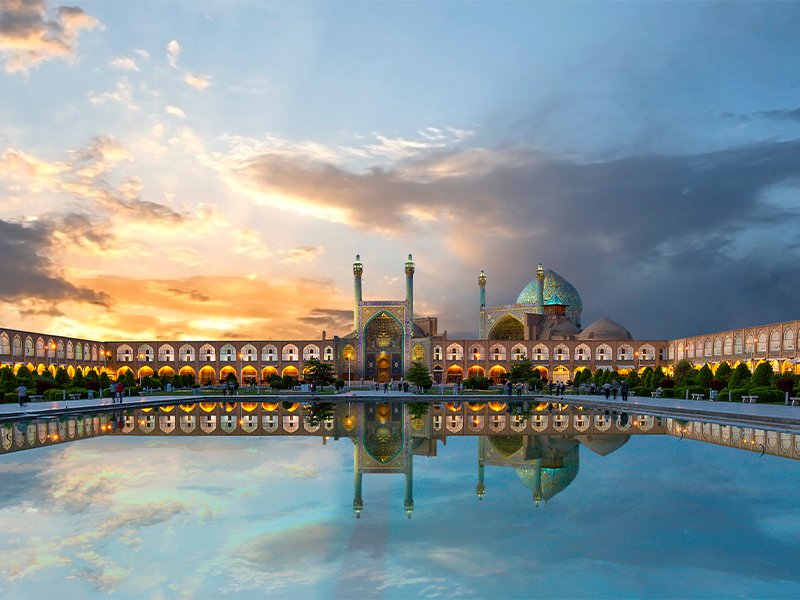 The awe-inspiring Naghsh-e Jahan Square of Isfahan covers the center of this historical city. Since the Square was inscribed in the list of World Heritage Sites of UNESCO, it has become an attraction for tourists from many countries. Naghshe-e Jahan was constructed from 1598 to 1629, making it a valuable property of Iran. Not only it is an old structure from the 16th century, but also possesses beautiful green gardens in the heart of the Square. You can sightsee the unique architecture of Iran as well as walk around the local shops selling traditional cookies and desserts of Isfahan. The famous Isfahan colorful carpets can be found in a Bazaar adjacent to this gigantic Square. It’s a perfect location for anyone wanting to buy souvenirs from Iran.

The throne of Solomon or simply Takht-e Soleymān is undoubtedly a treasured archeological site in Iran. It was constructed three thousand years ago by the Sasanian Empire (the last Iranian empire before the Muslim conquest) and is situated in West Azerbaijan (Northwest of Iran by the Turkish border). Some locals believe it was where Solomon resided or the throne was the birthplace of Zarathustra; however, this large monument was indeed used as a temple for praying and the teachings of the religion of Zoroastrianism. What’s more, is a mysterious lake lying near the throne that has bewildered the experts for many years. Iranians claim that an ancient treasure is buried beneath this large lake and it has been inaccessible for thousands of years. Up to this day, this place still is an enigma to archeologists. Nonetheless, strolling around the Throne of Solomon will exhilarate anyone encountering its eminence.

Located in the center of Bam city, Kerman Province the southeast of Iran is a popular historical site known as the Arg-e Bam Cultural Complex. The massive castle-like complex dates back to the reign of the Achaemenid Empire in 400 BC and is the largest place of residence in the world! The complex is 180,000 square meters and contained a mosque, bazaar, caravanserai, bathrooms, zurkhaneh, quarters, schools, barracks, and the house of nobles. Unfortunately, in 2003 the entire complex was destroyed by a massive earthquake, but later the President of Iran publicly announced that this cultural property is to be rebuilt and brought back to life. The central part of the complex is where the politicians and the military were inhabited and it’s surrounded by a fortress. The citizens’ abode was built by the border of the compound. Close to Arg-e Bam, you can find resorts, restaurants, a buffet, data coverage, and easy access to transportation. You can buy tickets to gain admission to this amazing cultural spot.

The Grand Bazaar of Tabriz is a huge senescent market in Northwest Iran, the city of Tabriz, and is considered the liveliest bazaar in Iran. The Islamic architecture of this monumental bazaar makes the place very special for tourists. It has decorated arched roofs made of red bricks and clay with hallways full of stores selling traditional items and pastries of the Middle East. The Grand Bazaar embraces more than five thousand shops with several mosques and schools. You might want to visit the Halajan Bazaar, Haj Muhammed Hossein Bazaar, Amir Abu AL Hossein (for jewelry and gold), or the warehouse of Haj Mirza Ali Naghi inside this giant Market of Tabriz. The place being ancient, the streets and alleys may seem like a never-ending labyrinth. During the Safavid dynasty, Tabriz became the capital of Iran, thus the market was the center point for trading and exportations. If you like to pay a visit, the Grand Bazaar is open from 10 AM to 5 PM for you to buy handmade products and sightsee the incredible formations of the ceilings and walls. 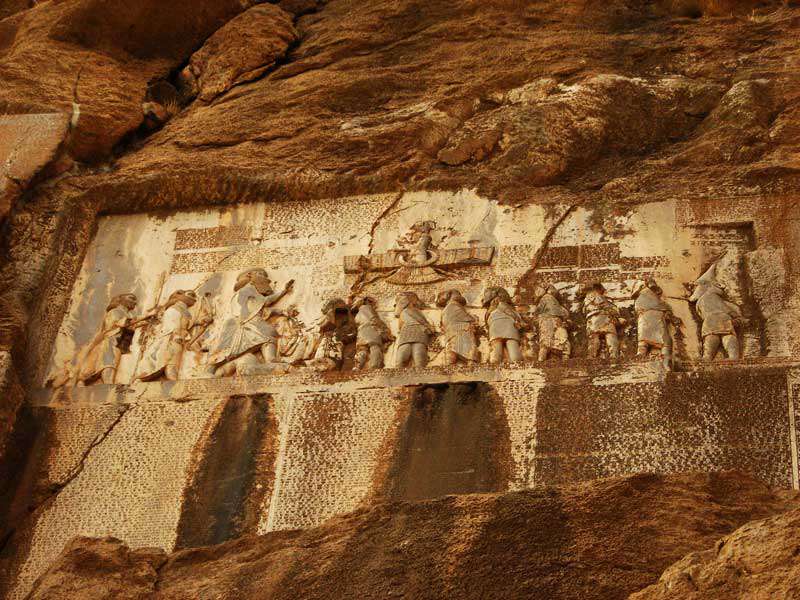 The astonishing Bisotoun Complex (meaning the abode of God) in the Kermanshah Province (west of Iran) has drawn countless travelers from abroad for years. The complex is popular because of its peculiar archeological constructions such as the Statue of Hercules, the Bisotoun Bridge, Shah Abbasi Caravanserai, the carved picture of Mehrdad II, and the image of Shirin sculpted on a mountain by her beloved Farhad (ancient Persian folklore like Romeo and Juliet). Bisotoun was erected almost four thousand years ago and was marked down on the list of World Heritage sites in 2002. Moreover, the compound covers 1,650 hectares of Bisotoun, but what makes this spot a highly valuable asset is the inscriptions of Darius I (the third King of the Achaemenid Empire) belonging to 520 BC. There are 28 different relics recorded internationally in Bisotoun including the Shekarchian Cave, Mar Doder Cave, the Bisotoun Mirage (Saraab), Mer Tarik Cave, the Medes Monastery, etc. These monuments are extremely important to Iran’s culture and heritage.

On one of the largest rivers of the Iranian plateau called Zayanderud in Isfahan city is a historical bridge known as the Khajoo Bridge which also functions as a dam. Built by the order of Shah Abbas II in the 1680s, Khajoo was originally a place for people to gather and meet one another and is now a dazzling site for tourist attractions, especially during the night. Concerning the architectural wonder of the structure, the lower section of the bridge regulates the flow of water and the upper bridge withstands traffic. The khajoo Bridge was regarded as the most beautiful bridge in the world during the Safavid era and the reason was the unique architecture and the tile decorations of the bridge. This masterpiece was constructed with bricks, stones, and mortar also it is 133 meters long and 12 meters wide which would be great to stand on the top and enjoy the view of the city. Isfahan has been described as “Half of the World” by writers and historians due to the gems the city contains, so if you want to take a look at this lovely bridge you can take a taxi by the Siosepol train station and drive to this elegant site.

Fin Garden, a magical place situated in the city of Kashan is the oldest garden in Iran. The Fin Garden is so beautiful that it is considered to be the perfect illustration of the Persian Gardens. You will be pleased by the calming sound of water pouring down from the large fountains in the light blue pools of the yard. The garden is 2.3 hectares and there is an old mansion with circular towers built on the other side of the fountains. It is a dream place for visitors since it also provides a teahouse for you to have the opportunity of experiencing pure serenity. In addition, it also holds a historical museum within the garden called the “Kashan National Museum” as well as Karimkhani’s Private house, the Jushan fountain, and many more stunning locations that are worth visiting. When you walk around the Fin Garden you will sense the enchanting beauty of it and encounter the history of many centuries ago.