Iran Adventure » Blog » Category: Events and festivals» » 7 Iranian Festivals and Ceremonies That You Should Know About

7 Iranian Festivals and Ceremonies That You Should Know About 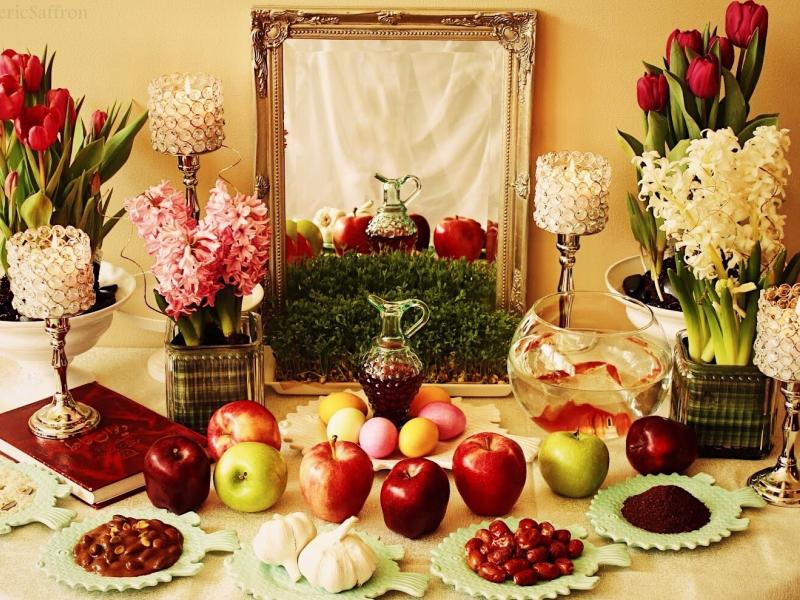 Due to the lengthy historical background of Iran, there are plenty of ancient Iranian festivals and traditions that Iranian people consider very valuable and hold very dear. They maintain rituals and celebrations that are more than 3000 years old. It would be delightful to visit Iran while these festivals are ongoing. Here are some of the well-known Iranian festivals that you should know about.

Nowruz means ‘a new day’ in Persian and is the most important festival of the year in Iran. It is also celebrated in several other countries across the Middle East, Central Asia, South Asia, the Balkans, and East Africa and dates back at least 3000 years. Nowruz marks the spring equinox when night and day are of equal length. This event is usually on the 20th or 21st of March. It is often associated with and influenced by Zoroastrianism.
Many begin preparations for Nowruz weeks in advance. Preparation for the new year includes an arrangement of the haft-sin- a spread of seven items representing renewal and springtime. Its main item is the Sabzeh, a sprouting plant that symbolizes rebirth. Communal festivities include feasts, bonfires, and celebrations of culture, such as musical performances, poetry readings, and traditional games.

It consists of two Persian words Chaharshanbe, meaning Wednesday in Persian, and Suri, which means festive or party. The last festival in the Persian calendar year is Chaharshanbe Suri, which is held on the last Tuesday evening before the last Wednesday of each year. Centuries have passed since this festival was held. On this occasion, Iranians hold a ritual in which they set up big fires and jump over them, chanting a Persian song that means praying for leaving behind all diseases and concerns of the current year and starting a new year joyfully.
Chaharshanbe Suri also has a custom similar to trick or treat. Some people wear disguises and knock on doors to receive snacks by hitting spoons against plates or bowls. Iranians eat a mix of nuts and fruits during Chaharshanbe Suri Festival. The package is a mixture of sour, salty, and sweet nuts, such as pistachios, almonds, chickpeas, and raisins, alongside dried fruits.

This festival is held on the thirteenth day of Farvardin (The first month of the Iranian calendar), in other words, the thirteenth day of the Nowruz (Persian New Year), which would be April 1st or 2nd on the Gregorian Calendar. Sizdah Bedar is also known as Nature’s Day, which means spending the thirteen outdoors.
“Sizdah” is the number 13 in the Farsi language and “Be-dar” means getting rid of something, so Sizdah-Be-dar means getting rid of the unlucky number 13. But Iranians no longer believe in this superstition and consider each day a manifestation of God and nature. By being in nature and rejoicing, Sizdah-Be-dar ended the Nowruz ceremonies. This day is the last day of the New Year celebrations and holidays. On this day, Iranians love to dance, sing, play around, and eat special foods together.

Yalda Night or Chelle Night is an Iranian Northern Hemisphere winter solstice festival celebrated on the longest and darkest night of the year. The ancient Persians depended on agriculture for their livelihood and had to plant and gather according to seasonal changes. By experience, they learned that the longer days and warm sunlight helped their crops and the other months brought shorter days and longer nights. They discovered that as the night grew longer, the daylight hours started to get longer. In celebration of the triumph of light over darkness, this night was called Yalda, which means rebirth (of the sun). 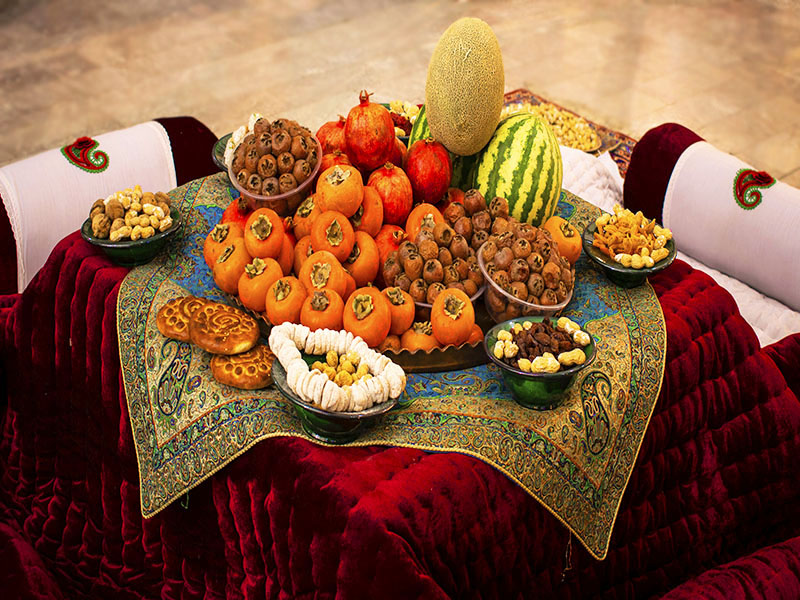 Yalda, the longest night of the year

During the night, they gathered with family and friends, ate delicious food, drank and sang happy songs all night, and listened to stories about old times. They make the year’s longest night the coziest. On the occasion of Yalda, divinations by Hafez anthology are one of the pleasant activities of the night. Each person makes a secret wish before the elderly member of the family opens the Hafez anthology to read a random page. The guests interpret these poems as Hafez’s response to their wishes. You can join Iranians who celebrate the winter solstice in restaurants. There, local people will amaze you with their enthusiasm and hospitality.

Among all the cities of Iran, Kashan has a special place and is considered one of the most important cities in Iran tourism, which hosts many tourists daily. Especially in the spring and summer, this city has become one of the most important tourist destinations, and many trips to Kashan take place to visit the historical and natural attractions of this city. Participating in the ceremonies like the rosewater festival in Kashan, which is a long-standing and spectacular ritual of Kashan, is something you can only experience in Iran. In Ordibehesht, the Iranian Damask flowers of the Rosaceae family finally grow and get ready for damask rose essential oil extraction. If you go to Kashan in June (Khordad), there will only be buds on the branches in Ordibehesht.
The Rosewater festival in Kashan is arranged in groups early in the morning. At this event, the organizers of the ceremony pick flowers, and then the main ceremony begins. Usually, flower pickers start work before sunrise since they have to finish the task before noon. Based on an old farmers’ myth, flowers picked before sunrise will spread a more prosperous and stronger odor. Rose water making is practiced in different ways but what tourists see in Qamsar and Niasar is the same traditional method of rose water making used in the old ages. However, with new equipment. Rosewater is prepared through a distillation process. Each May, Niasar and Qamsar in Kashan are filled with the aromatic odor of Damask roses, where you can find different methods of rose water making as well.

Iranian saffron is known in Persian culture as red gold. Iranians use saffron in traditional medicine, aromatic foods, and colorful desserts. In Iran’s Khorasan Razavi province, Torbat Heydarieh is where saffron is harvested. Iran harvests about 80% of the world’s supply of saffron. As the harvest of saffron approaches, the Iranian festival begins in early November. While most other vegetation is gone, the bright purple flowers cover the fields and create an outstanding landscape.
Iran is the biggest producer of saffron in the world. Major saffron producers of Iran are located on the east side of the country. If you wish to see the largest market, in that case, you must take a trip to Mashhad, which is also known for its religious importance. Flowers would wither if the sun fully rose, So the farmers must pick the flowers before sunrise. The harvesters sit together and remove petals from the filaments of saffron, and then they would have to dry the saffron they harvested.

Ramadan is the ninth month of the Lunar Calendar. During this month, adult Muslims fast from dawn to dusk. They do not eat any food or drink any liquids. It is a time of praying, contemplation, and purification of the body and soul. In this month, Muslims empathize with the poor and the needy and learn to appreciate God’s blessings in their lives. Also, they share food with the poor and invite people for the meal that breaks the fast (Iftar). Mosques become more active during Ramadan. Volunteers who perform acts of charity and distribute food in mosques to people. The lifestyle of the people and working hours of some offices and shops in Iran face fundamental changes throughout Ramadan. 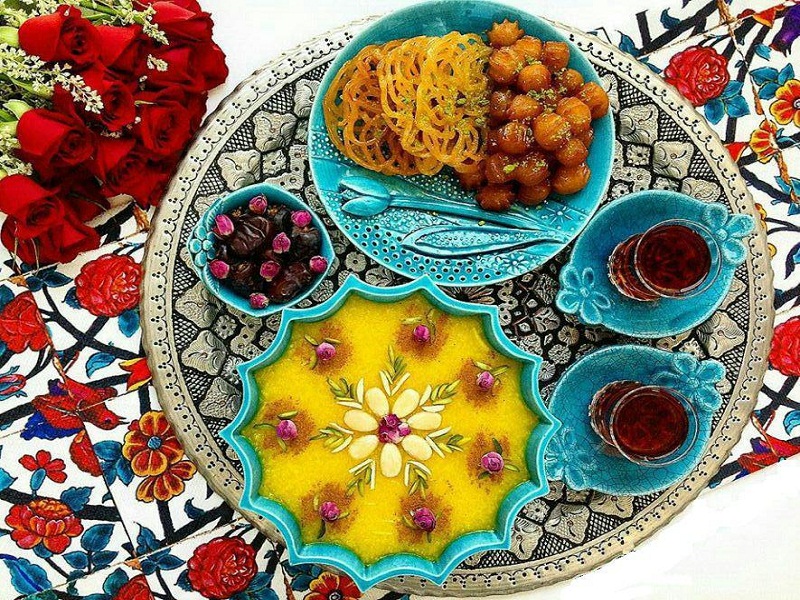 In Ramadan, people get up before dawn to have a pre-fast meal called Sahari. this meal before sunrise indicates that fasting can be a healthy diet. Since fasting people do not receive the nutrients, sugars, and water they need during the day, they should make up for this deficiency by eating nutrients at predawn and Iftar. Iftar meal includes a variety of foods that are good for the body and maintain the strength of the fasting person. Fasting people do not break their fast at once. They break their fast with a hot soft drink (water, warm milk, rose and saffron syrup, or Persian tea) and rock candy or dates to raise the blood pressure, and then comes the Persian tea.
Eid al-Fitr is one of the religious holidays held in Iran and many other Islamic countries. It is the end of Ramadan and the first day of Shawwal, the new lunar month. A magnificent feast is traditionally served to celebrate Fitr, one of the most important Muslim holidays. Most people attend their local mosques and perform prayers. On this day, nobody fasts!