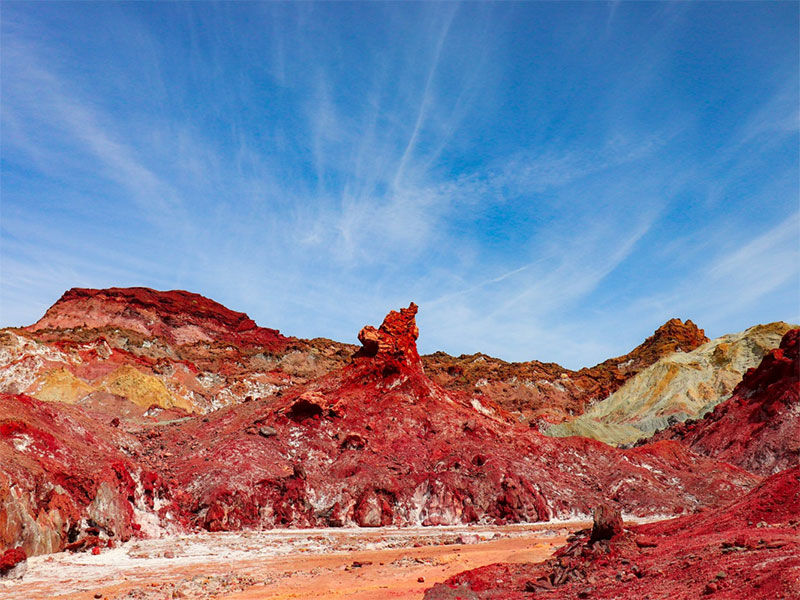 It may not be an exaggeration to say that Iran is a world on one border; from historical tourist attractions to pristine natural attractions that some of us have not even heard of. Whether you are adventurous or curious and eager to learn, be sure to remember these seven wonders of Iran for your next trip.

You may have heard about the mysterious and dangerous nature of Takht-e-Soleyman Lake, but the very mysterious nature of the lake has made it one of the wonders of Iran and among the tourist attractions for foreign and domestic tourists. The most fascinating and amazing thing for tourists in this ancient region is the existence of a mysterious lake, full of treasures of ancient Iran and other parts of the world.
Although the lake is very beautiful and calm, it ruthlessly engulfs every creature, so that when you visit this place, you will notice several signs that show the warning signs of “no swimming” inside the lake.
In recent years, some travelers have ignored these signs and entered the lake, not only did they not return alive, but also their bodies have not been found!

Maharlu Lake is a seasonal Salt Lake in the heights of Fars province and is located 15 km southeast of Shiraz. With an area of about 600 square kilometers, the lake is a haven for wildlife and birds. The most important creatures of this lake are birds such as flamingos, ducks and anchovies. Khoshk river is a seasonal river that flows into this lake from Shiraz city and brings most of the floods to the lake bed during heavy rains. The lake water usually evaporates by the end of summer and shows a white view of the lake bed. In mid-summer, due to the high rate of evaporation and salt concentration, the water of the lake turns reddish pink. An amazing scenery for photography! 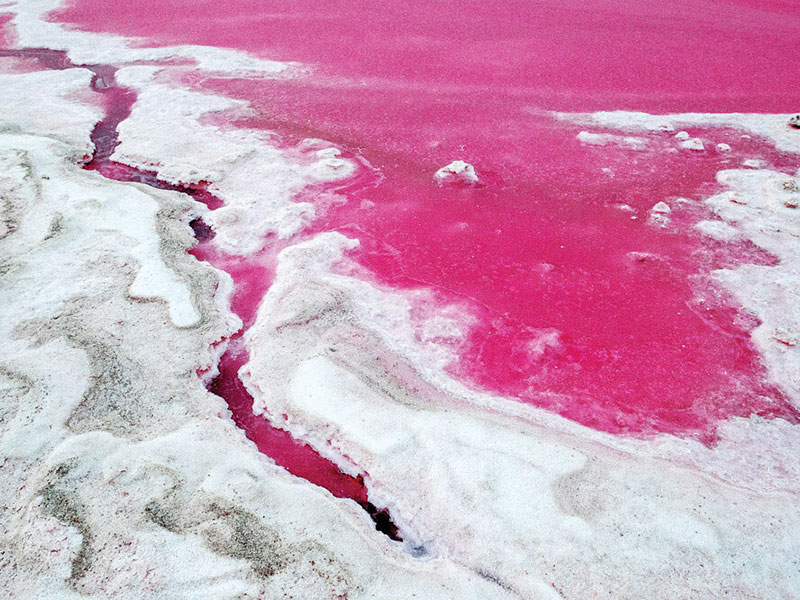 Hormoz Island is one of the three small islands around Qeshm Island. The strange feature of this island is the red soil of its hills and beaches. This oval island is actually a large salt dome in the Persian Gulf, which is 8 km away from Bandar Abbas. The proximity of the island to the Strait of Hormuz has provided it with a strategic and commercial position throughout history. The surface of Hormoz Island is composed of sedimentary and volcanic layers. The salt hills that cover most of the island are made of edible salt. The highest point of the salt hills is 186 meters above sea level and the diameter of the largest hill is eight kilometers. Apart from the attractiveness of the soil, the sights of the island have also turned this area into a strange tourist destination.

Have you heard of the “oldest forest in the world”, “a relic of the first forest on earth” or “survivors of the Ice Age”? These are all titles attributed to the Hyrcanian forests; A forest that is very important for the world.
The yew forests are the ancient heritage of our country; Evergreen and evergreen trees belong to the third geological period and before the Ice Age, which can be said to have lasted 190 million years on Earth.
You can find Caspian Hyrcanian forests in north of Iran and about 150 km away Tehran.

One of the unique natural attractions of Iran are the Kalouts of Shahdad. Some describe the landscape of Shahdad Kalouts as a transcendental and extraterrestrial landscape.
This area is known as the hottest spot on earth and includes part of the Lut Plain, which is among the UNESCO World Heritage Sites in Iran. The Kalouts of Shahdad have been formed in an area of 11,000 square kilometers and some call this region the legendary city of clods.
This natural phenomenon was created about 20,000 years ago by water and wind erosion. Shahdad is a desert region and you should visit it in cool seasons, especially in autumn. The best season to travel to Shahdad is autumn and the weather is moderating. Extremely cold winter nights in this season are waiting for you; But at the end of March, the tourists go to the desert again. 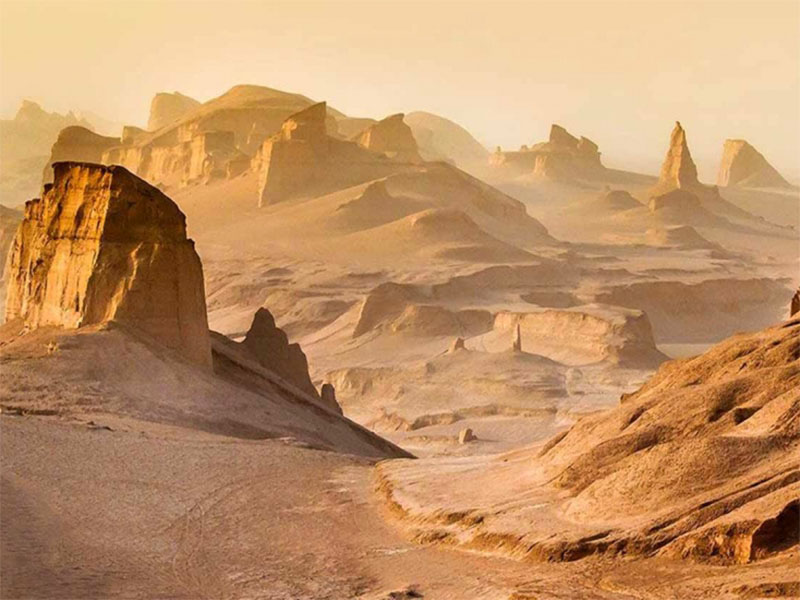 Shahdad is a desert region and you should visit it in cool seasons!

Ghost Lake is a lake called Hornbeam which is located in Nowshahr, Mazandaran province. In the middle of this lake, old trees can be seen that have dried up despite the lake water and rain. For this reason, the name of this lake is called Ghost Lake. This wetland with 700 meters length and 300 meters width is one of the mysterious natural attractions and one of the wonders of Iran.
During most days of the year, the area is mingled with the fog and sound of wild animals, which has caused the dead trees in the middle of the lake to create a scene of chaos and it has been dubbed the “Ghost Lake”. The lake is about 700 meters long and 300 meters wide. 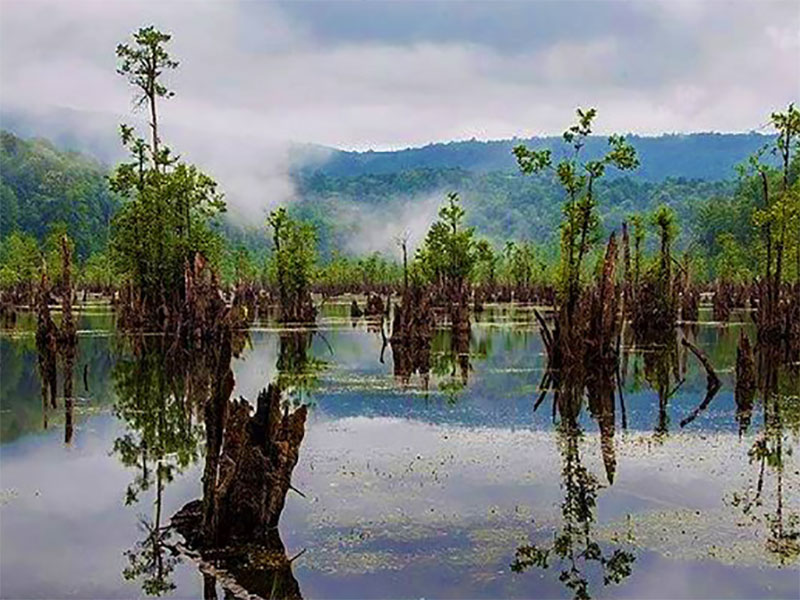 Rig-e Jenn is a very old valley with beautiful and eerie valleys and erosion. This valley, which is known to the locals as the Valley of the Paradise, is located in the city of Tabas and is considered among the wonders of Iran. The place is made up of two parts, Cal and Jenny. Cal is a valley or path created by floods and water currents because the villagers considered it scary and a place of paradise. The frescoes on the walls indicate erosion and the presence of floods over thousands of years. Perhaps roaring rivers have passed through here in the past.

Wonders of Iran are more than what we said so for knowing each region attractions, send us a message in WhatsApp, you can find our numbers from website easily or contact us via info@adventure.ir.