Explore the beauty of caves in Iran 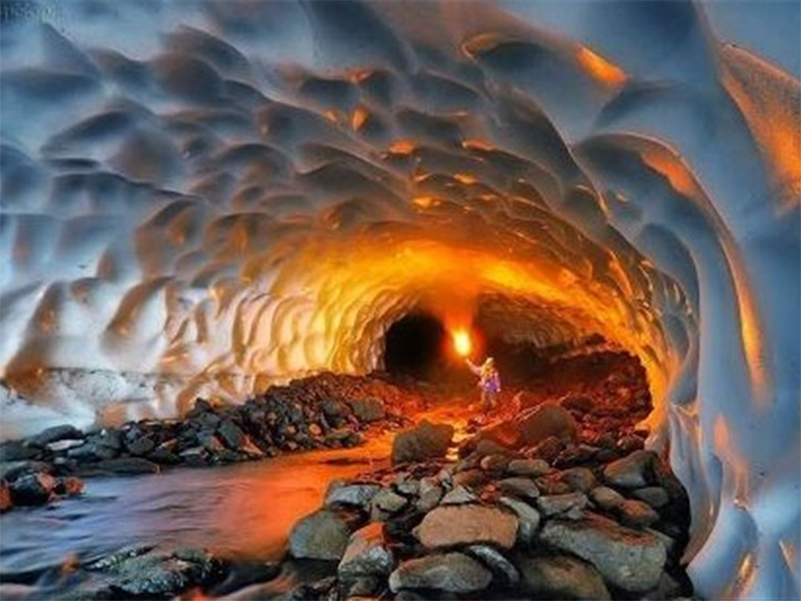 If you are tired of casual walks into the woods or by the sea and you want excitement, you should try caving! Dark, humid, and silent, caves are mysterious natural wonders underground. There are more than 300 beautiful and extraordinary caves in Iran to visit.

Do you know one of the longest salt caves in the world? Qeshm Island Salt Cave is one of the most beautiful natural attractions in Hormozgan, which offers a collection of unique beauties. The white streaks of salt on the body of this mountain show a stunning view to you. The roof of the salt cave is covered with marble and crystal chandeliers in different shapes. In this cave, there is a natural white pool that appears as a salt spring. It reflects the beautiful images and unique landscape in this area. Actually, the bottom of this spring is red, and you can see the sediments of Akhra mud in it. Ceiling icicles are the first attraction you will see. Of course, to visit this cave you’ll need a flashlight because sunlight does not reach this depth. Also, you should be prepared for bats to jump! This cave has a magical feature. The extracted salts have medicinal properties and are used as medicine, especially for professional athletes. 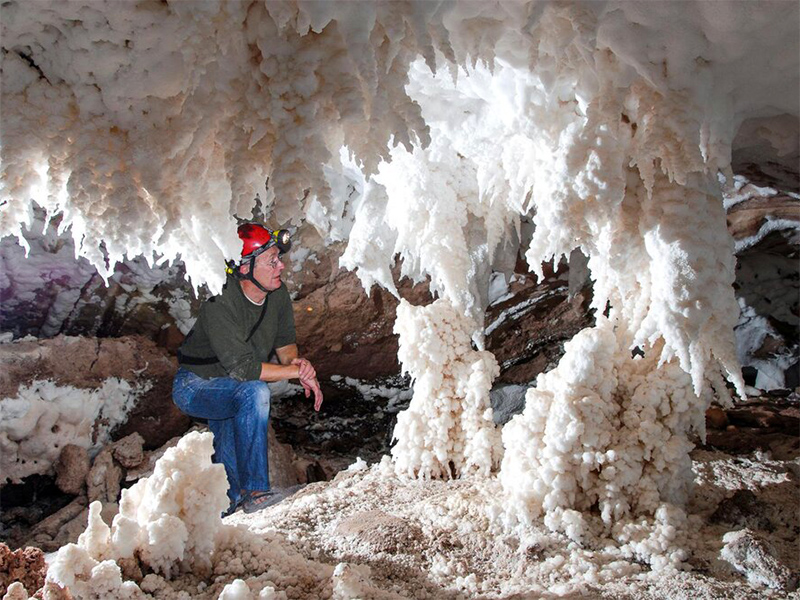 Ali Sadr Cave is one of the wonders and beauties of creation and is considered one of the sights of Hamedan. This cave is one of the few navigable water caves in the world that have the longest sailing route. An interesting feature is that you can see icicles, stones and, sculptures in strange or animal-like shapes all along the way. The temperature inside the cave is between 12 and 14 degrees Celsius and is constant throughout the year; Therefore, it is suitable for tourists in all seasons. In summer, you will feel a pleasant coolness. In winter, despite the cold weather, you will not feel cold! The underground lake of Ali Sadr Cave has clear, colorless, and odorless water; with a flashlight, you can see the bottom, which is full of beautiful stones and marbles. 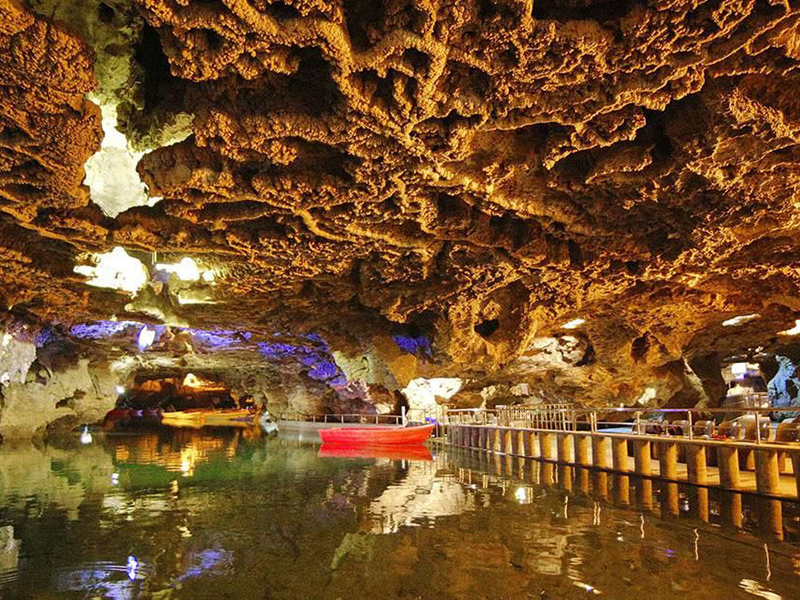 Shapoor Cave is located 6 km away from Bishabour city in Tang-e-Chogan. Shapoor is among the most beautiful caves in Iran and among the many attractions in Fars province. This cave can be named as one of the most impressive attractions that you should not miss in any way! Some caves not only have spectacular natural landscapes but also their charm is combined with cultural heritage. So, they have a special place in both historical and natural aspects. Shapoor Cave is one of the most important historical caves in Iran. It seems that the cave was one of the religious and ritual places before the Sassanid era. What is inside this cave? The first thing that appears right in front of you is a huge statue; a spectacular statue of King Shapoor the first, that shows its grandeur. In some parts of the cave, icicles are hung from the ceiling presenting a unique beauty. Interestingly, animal figures are carved on the walls, and you can see them.

Karaftoo Cave is one of the sights of Kurdistan province, which is located 67 km from Divandare city. This cave is important because of Greek inscriptions on the third floor, according to which this place is attributed to Hercules, one of the gods of ancient Greece. The entrance is 20 to 25 meters high, which in the past did not have a staircase to access it; but now, you can easily climb the cave. The main path of Karaftoo Cave is about 750 meters long and, its roof height varies from one to 12 meters. The cave has high halls, winding paths, and corridors, and no one has been able to identify all of these paths. You should know that the most beautiful architecture of the cave is on the third floor. 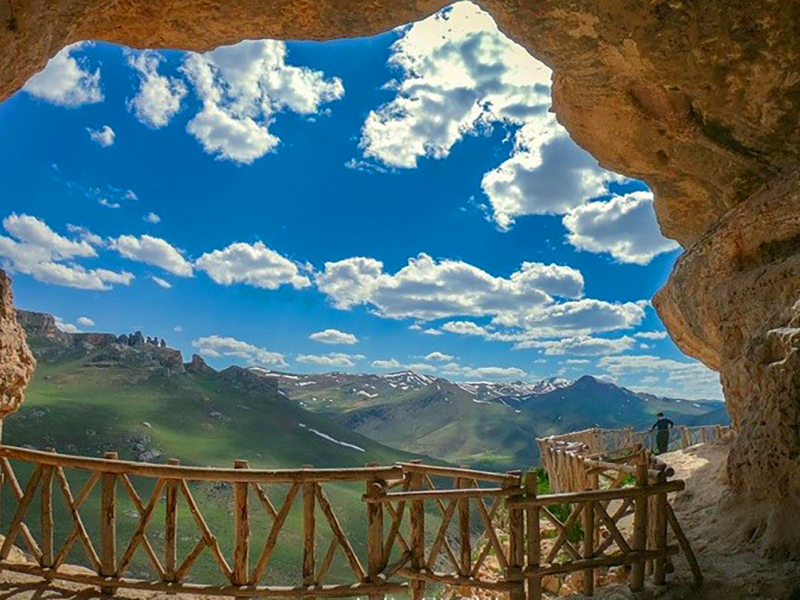 There is Parau Cave 12 km northeast of Kermanshah, which is known as the most dangerous caves in Iran. It is a cold and vertical cave, and you have to climb the mountain to a height of 3050 meters before reaching its entrance! In this cave, you can see water that has flowed from the melting of the underground glaciers. So if you are a professional caver and want adventure, spring and summer would be the best time to visit Parau cave, because the cold weather makes it impossible to enter in autumn and winter. The path of this cave is difficult to cross. Along with the cold weather, harsh roads and rough walls will tear up the costumes of the cavers. In addition to being a professional adventurer, you must also be brave!

One of the attractions of Zanjan province is Katlah khor Cave, which you must go to Khodabandeh to visit. The cave consists of three floors and has side tunnels and many columns in the main passages. Conical icicles hanging from the ceiling come in various colors, and some are seen as crystals. When you enter the cave, you can see a 4,000-meter vestibule with a short roof and side vestibules. In this cave, with the assemblage of lime, you will see things that are similar to objects we see in our lives. So, they are named after this similarity. One of the most interesting parts of this cave, which you always see many tourists around, is the bride and groom section, whose stalagmites are very similar to bride and groom.

Chama Ice Cave is one of the most amazing and spectacular caves in Iran, which is located in the northwest of Chaharmahal and Bakhtiari province. It is created due to its location in deep valleys with snow. The angle of sunlight causes the snow not to melt every year and remain permanent! In addition, Chama Ice Cave is the largest source of freshwater in Iran. Under the ice of this cave, there is a spring that has a very cold and clear water. The water of this spring flows into the Koohrang dam. We suggest you do not forget your camera when traveling to this beautiful place, because you can take amazing photos! 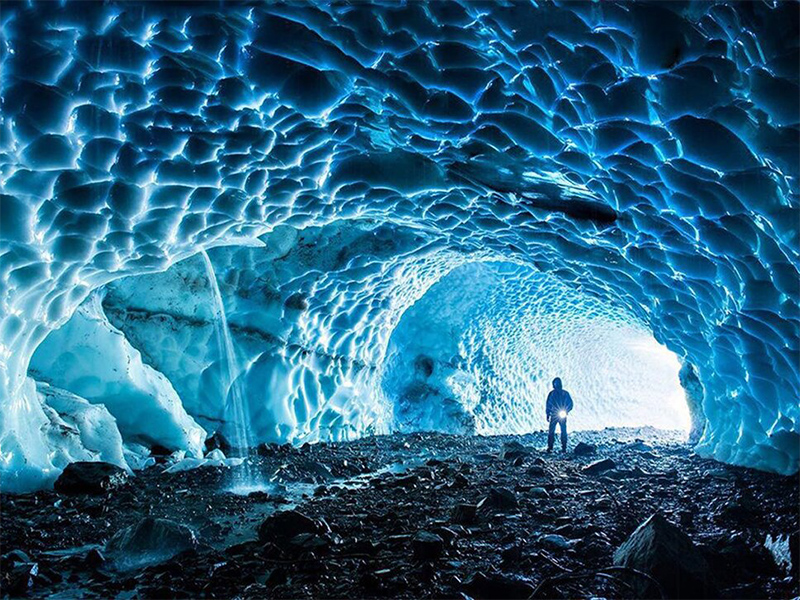 Chama Ice Cave is one of the most amazing and spectacular caves in Iran.

Rudafshan Cave is one of the tourist attractions near Tehran, which is located in Damavand city, at an altitude of 1945 meters above sea level. It takes about 20 minutes to reach it. Do you like bats? This cave has other unique features that have made it famous. Rudafshan is the habitat and breeding ground for bats. If you go to the bottom of the cave, you can watch these bats up close. Drops of water falling into the pits make noises that break the silence of the cave. These drops have created beautiful and sometimes giant icicles for millions of years. Also, there is a vestibule with a pool of water; it is called the Temple of Anahita.