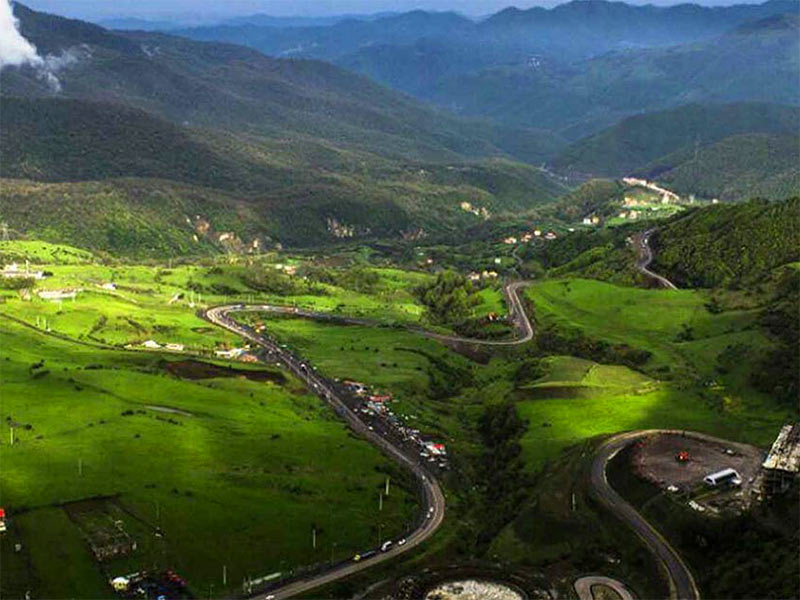 How well are you familiar with hidden gems in Iran? With a civilization spanning over 2,500 years, Iran has embraced a great number of attractions to be visited. Having made a comeback on the travel scene in recent years is another convincing reason to visit this wonderland. Iran is quite well-known for its Persepolis or Naqsh-e Jahan but there are hidden gems in Iran of cultural or natural value that only the locals might be aware of their existence. There are sometimes discoveries in this ancient land that even the locals don’t know about! So, if you are looking for new pristine places to go hiking and trekking, or camping, visiting Iran would be the right place. Here is our list of top destinations for nature lovers that offer a new perspective of cultural and natural attractions in Iran.

Let’s visit a creepy lake among the dense forest! According to the folklore, the lake is full of dead trees! By which they mean the dried trees having grown right in the middle of the lake. The reflection of the trees’ image on the surface of the lake caused the lake to be called “Arvah”, meaning “Ghosts” by the locals. The lake covers an area of 40 hectares with 300 meters long and 70 meters wide. Local houses and eco-lodges are a good option for accommodation in the area if you would like to spend an overnight here. Visiting the lake and the surrounding is recommended only with a four-wheel-drive vehicle and the best time to visit is spring and summer.
To reach here drive to Mazandaran province in the north of Iran, Nowshahr County, and then to Vanosh Village. 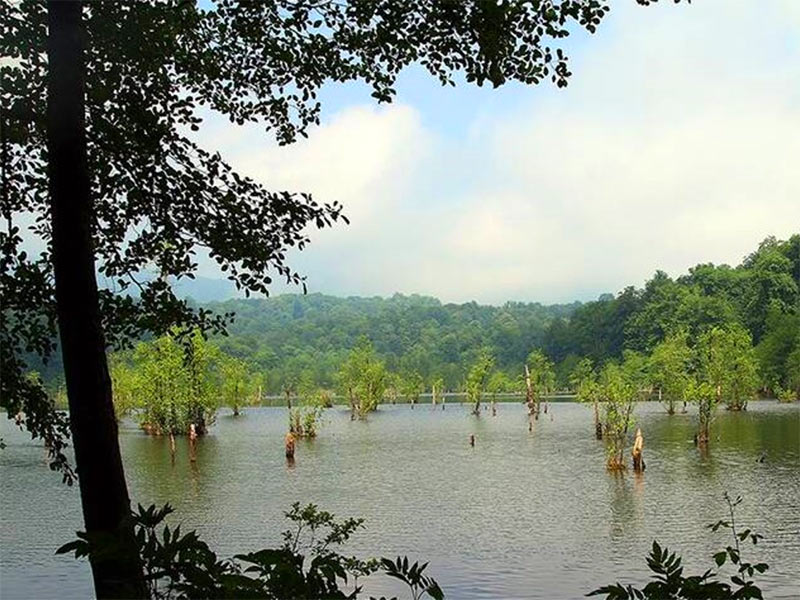 Arvah Lake: A lake is full of dead trees!

The village of Uraman, according to archaeological reports, is estimated to be between 40,000 to 12,000 years old. The village is a fascinating rural area attracting many tourists to the annual performance of the wonderful local ceremony of Peer Shahriar. The ancient houses are also of great attraction to tourists, arranged in a way that the roof of one house is the courtyard of the other.
The inhabitant of this region and their language is known as Hevarami, Urami dialect, spoken by the residents, is considered one of the most famous dialects of the Kurdish language in Iran. The remnants of ancient fire temples in this region are indicative of the fact that people have been followers of Zoroastrianism before converting to Islam.
You can enjoy visiting the region best during spring and summer since the weather is cool and pleasant. Traveling in winter is not recommended due to the harsh cold weather.
To arrive at the Uraman Takht drive to Kurdistan province in the west of Iran, Marivan, the village is located in Takht Mountains. 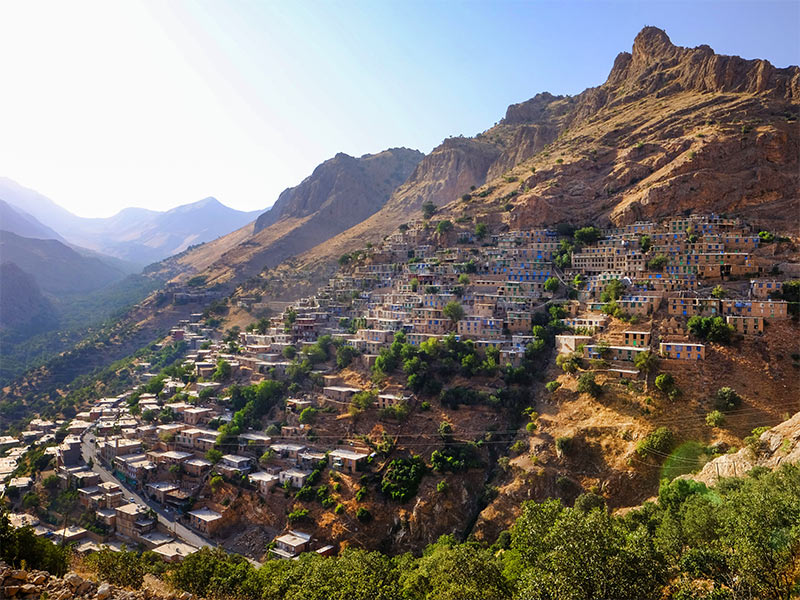 The ancient houses are arranged in a way that the roof of one house is the courtyard of the other.

Located in Markazi province, this beautiful cave dates back to the third geological period. Chal-Nakhjir means pits on a hunting ground. If you are interested in geotourism, here is the right place for you! The cave has appeared through millions of years. The fault movement caused the creation of corridors and some fabulous ponds in it which are the most outstanding feature of the cave.

The cave is among the top destinations for nature lovers in Iran, the geologists have estimated the length of the cave is about 12 kilometers. Only 6 kilometers of which have been discovered until now. The air temperature inside the cave, is between 7 ° C and 14 ° C., just like other caves. There are eye-catching Crystalline and spongy ornamentations on the walls, ceiling, and floor of the cave which are found to be among the best samples of geological features. 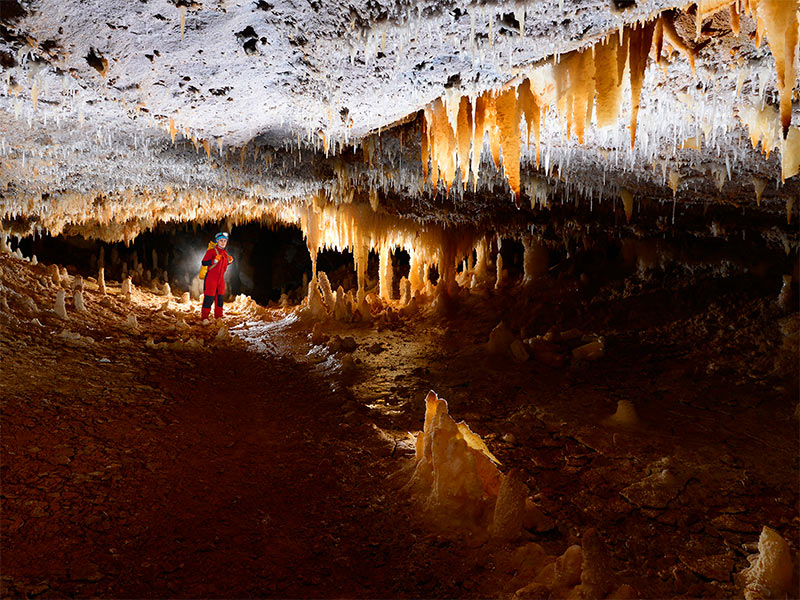 Zarivar is more than a tourist attraction; it is a lost paradise in the west of Iran! The lake’s name has been got from the Kurdish language, the language of most western inhabitants of Iran, meaning “like the sea”. The lake is not only a lake, it a rich aquatic ecosystem that is of great ecological significance, since a variety of species including fish, birds live in this ecosystem. It is also an important source of sweet water contributing to the agriculture of the province. The freshwater of the lake and the fish swimming inside it offers an opportunity for fishing.
It is located in a large longitudinal valley surrounded by mountains covered with thick forests both on the east and west sides. The vegetation diversity of the area is also outstanding, the amazing natural landscapes are quite fascinating for recreation activities. The best time to visit Zarivar Lake is from April to September.
It is located 2 kilometers west of Marivan city, Sanandaj, Iran. 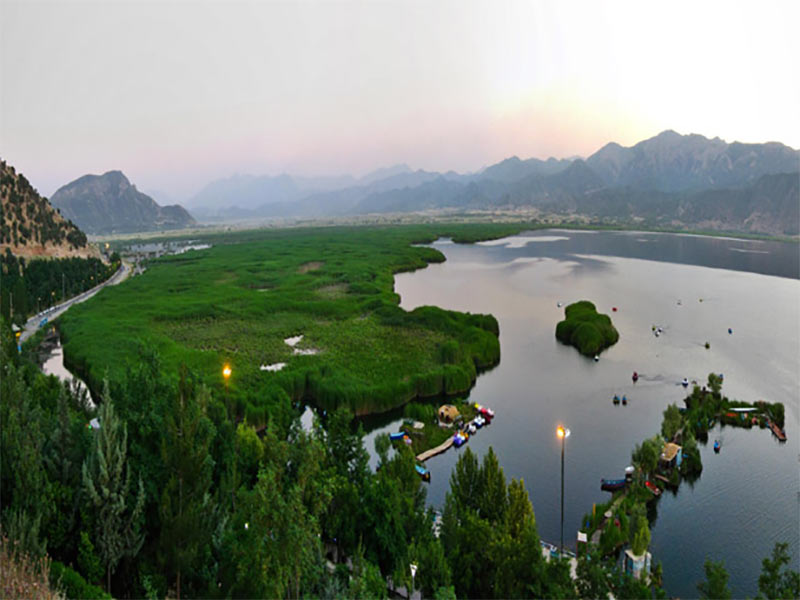 Zariwar Lake is not only a lake, it a rich aquatic ecosystem in the western part of Iran.

Jahan-Nama Village shines like an emerald above the clouds! Located in Golestan province, this pristine village offers spectacular and breathtaking landscapes. Being located in Jahan Nama preserved district surrounded by a large plain, ancient Hyrcanian forests dating back to millions of years ago, and untouched mountain forests in the northern part of Iran has caused this village to be a unique natural attraction for many international and domestic tourists. The preserved district is one of the main habitats for tigers in Iran and is among the top destinations for nature lovers.
It is located in Golestan province, Kordkuy city, Jahan-Nama village. 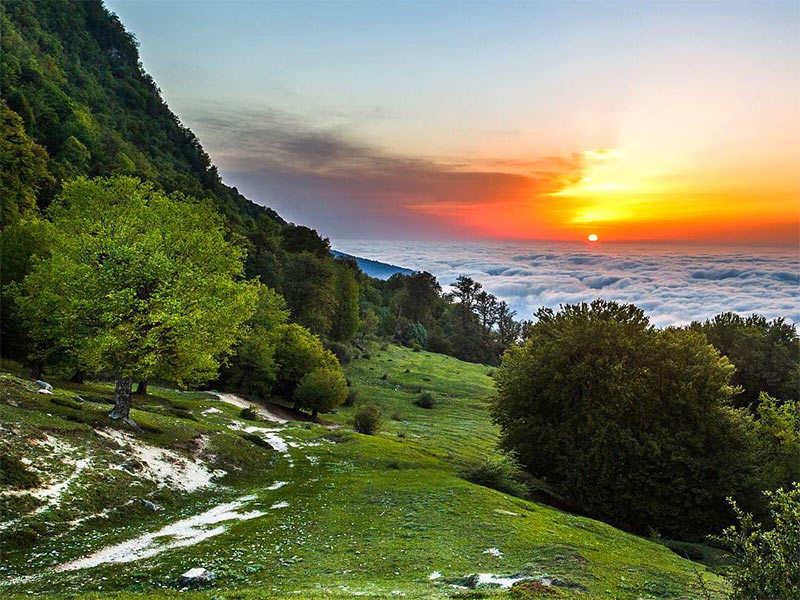 Jahan-Nama Village shines like an emerald above the clouds!

The astounding Dohezar Valley lies near Tonekabon, Mazandaran Province, a northern province in Iran located along the Caspian Sea. Here is among the top destinations for nature lovers in Iran and the region is truly worth visiting particularly during summer as it has a cool and pleasant climate. The local culture and cuisine are also quite fascinating to visitors. There is a diversity of local foods to be tested in this peaceful region. You can easily rent a local house for a fair price or set up your tent for joyful and memorable camping somewhere among the dense forests.
It is located in Dohezar Valley, Tonekabon, Mazandaran Province, Iran. 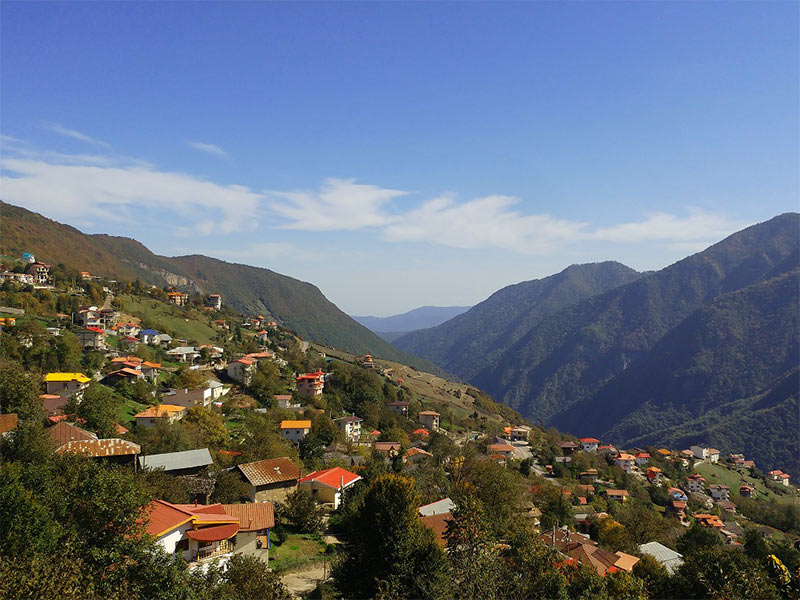 Lorestan Province is known for offering eye-catching natural landscapes including Shiraz Valley. Sedimentary rocks of this place have turned to interesting and unique shapes by the effects of rain, wind and other atmospheric precipitation over millions of years. 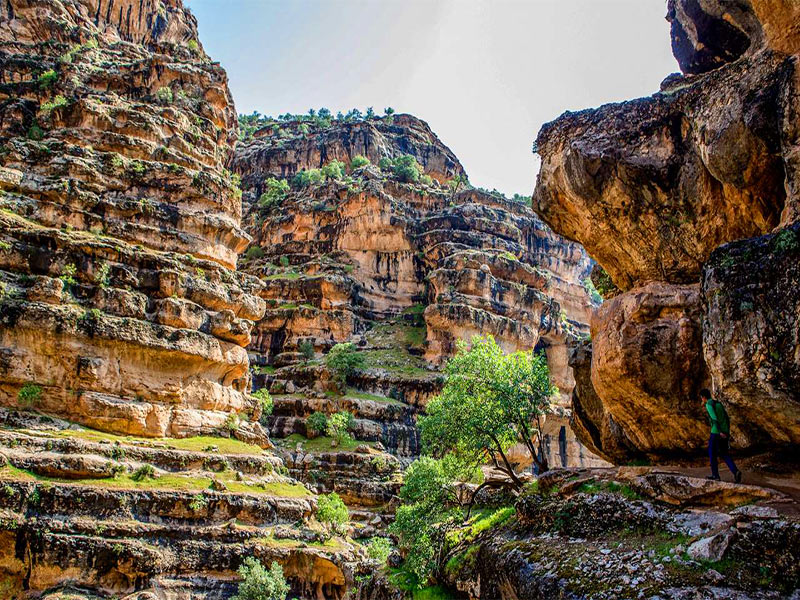 Shiraz Valley made of Sedimentary rocks: west of Iran

Surrounded by walls with a height of 150 to 200 meters, Shiraz valley attracts many Iranian and foreign tourists and adventurers every year. The best time for traveling to this region is during spring. It is located in Kuhdasht, Lorestan, Iran.