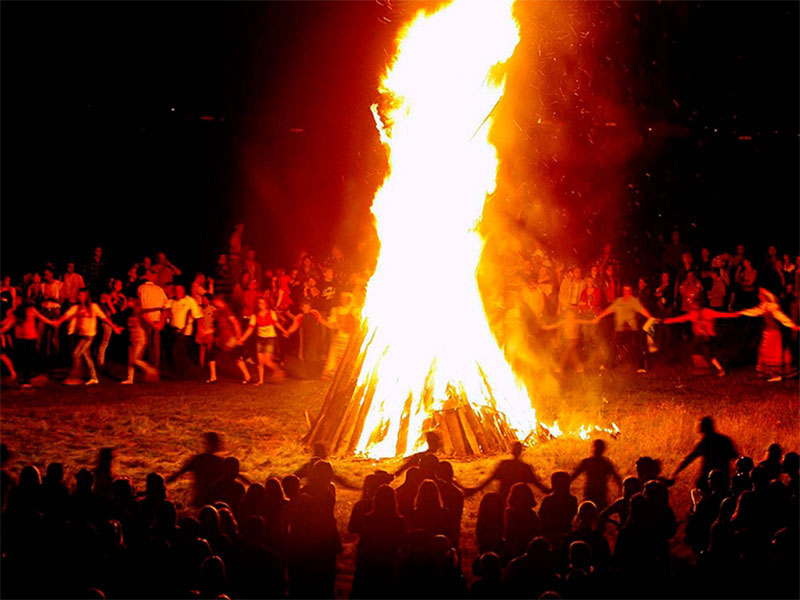 If you take a look at Iran’s ancient eras, you will notice that fire has always had a special place in Iran’s history and culture. Chaharshanbeh Suri, as one of the popular ceremonies in Iran, draws so many people to the streets each year to celebrate soon, the arrival of the spring and Nowruz holiday. Chaharshanbeh Suri is also known as the Fire jumping Festival since the entire country is brightened up by million piles of fire. People Cheer and jump over the fires until the morning when the sun, the queen of fires, is finally awake.

The celebration of Chaharshanbeh Suri has been a national holiday since ancient times. The word “Chaharshanbeh Suri” comes from the two words “Chaharshanbeh” meaning Wednesday, and “Suri” meaning celebration, dancing, and red color in Persian. This ritual is rooted in ancient Iran and the custom has been held in many various ways in different eras of Iranian history. The fire has always been considered a symbol of light, and light symbolized knowledge or the destroyer of darkness and evil and also a sacred element in ancient Iran.

Many believe that the last Wednesday of the year is the time when the spirits of the dead would come around to visit their beloved ones; the traditional roots are close to Halloween in western culture. Chaharshanbe Suri is celebrated in the honor of the dead and also to welcome the beginning of spring and Nowruz and it is not only about jumping over the fire but also it accompanies many other joyful rituals.

How is this event related to Nowruz?

Chaharshanbeh Suri is known in Persian culture as the introduction and preclusion to Nowruz. The Chaharshanbeh Suri ceremony has always been held on the last Wednesday of the year, almost everywhere, including villages of Iran. People light a fire outside their houses and make a cheerful atmosphere to have fun with their family and friends. Grownups and mostly children jump over the fire, and by saying, “Give me your beautiful red color and take back my sickly pallor!”, to the fire, they believe that fire would fade away the diseases, sorrows, and worries of the past year. In this event, everyone wishes to start the new year with ease and happiness. 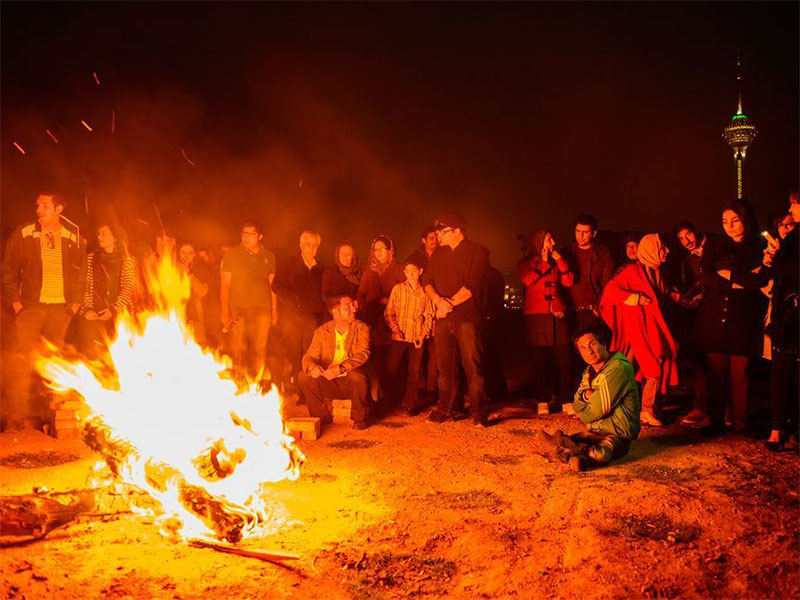 According to the ancient tradition, a large fire should be lit on this day, and the fire is supposed to be kept lit until the next morning. The ceremony traditionally should start on Tuesday afternoon when people begin to light a fire and jump over it. The essential part of the Chaharshanbeh Suri celebration is fire. People set fire piles on the roof, in the yard, or in the alley while the sun is setting.
“The new pot” ceremony on Wednesday night is an ancient tradition that is no longer being held among all Iranian people. Back in the day, people took their old pottery jars to the roof of their own houses and threw them away to the alley. There is a history behind throwing away the old pottery jars from the house. People used to believe that during the passing year, misfortunes and bad judgments had filled the jars. The only way that was considered to get rid of all the bad luck would be throwing the pottery jars out of their houses. Therefore, to be fully prepared for the new year, they would buy brand new pottery for their home to trap the upcoming misfortunes.
One of the old customs on Chaharshanbeh Suri night is to prepare and eat nuts, which are popular all over Iran. The components of these colorful and beautiful nuts are all edible seeds and dried fruits. In addition to the main ingredients of salty and sweet roasted nuts, like pistachios and almonds, dried peach and apricot leaves, green raisins, unroasted hazelnuts, dried citrus, and walnuts are also added to the magical bowl of nuts.

In Gilan, one of the northern cities in Iran, they celebrate Chaharshanbeh Suri with some particular customs. On this day, the Gilaki people buy several candles and collect rice stems, for the reason that one of the well-known rituals of the locals of Gilan is to light candles and make seven piles of fire with rice stems. One of the common beliefs among the Gilaki people is that on the morning of the last Wednesday of the year, the ashes of the previous night’s fires were poured on the trees to witness their fertility, and any person who intends to make a trip, leaves the house early in the morning. In this city, the traditional custom of breaking the jars to ward off suffering and evil is also common. Another amusing tradition of this city is to sweep away young girls, hoping that they would face great luck in their marriage next year. 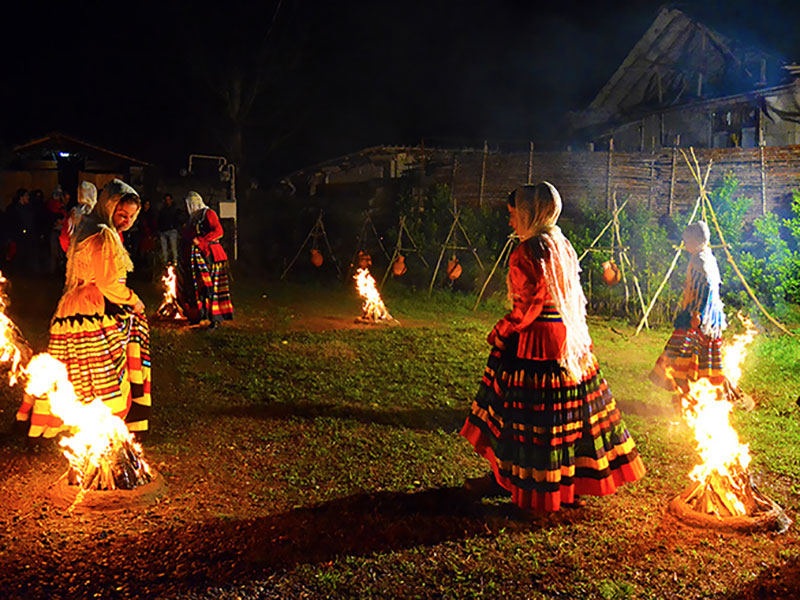 Regarding the older customs of the people in this ceremony, we can mention the bathing of some Shirazi women in the Saadieh spring, which is traditionally done for both health and warmth. Right after then, they start cooking pottage and halva, which is a very delicious sweetmeat. Shirazi locals believe that if they wash in Saadi water, the water that flows from the aqueduct of Saadi region and the mountains around, on the evening of the last Tuesday of the year, they will not get sick the following year. Therefore, on this night, Saadieh Tomb will get extremely crowded.

Lighting fires in passages, breaking jars, untying knots, and other Chaharshanbeh Suri ceremonies are common in Isfahan province as well. However, the glory of Chaharshanbe Suri night in Isfahan is the greatest among all the other cities. In Isfahan, Chaharshanbeh Suri is also called Red Wednesday. One of the oldest customs in Isfahan, which is no longer being held by anyone these days, is the custom of spooning. Children and teenagers would go to the neighbors’ houses and asked them for sweets, chocolates, and candies by hitting a spoon into a metal container while their faces are covered. Back in the day, this part of the night was the most exciting part for the children.

How is Chaharshanbeh Suri Celebrated Nowadays?

In old Tehran, they collected dried bushes from the surrounding deserts, brought them back into the city with camels, and returned them to different neighborhoods. Then, after the sun was down, they started burning the same dried bushes. When the fire was finally lighted, everyone had to jump over it and repeat the sentence: “Give me your beautiful red color and take back my sickly pallor!”. But unlike now, there were no signs of the grenades and explosive materials of today’s teenagers, with the sounds of the explosions that shake the windows of buildings and startle everybody. Except for fireworks and seven crackers that light up the sky with their colorful sparkles, Chaharshanbe Suri has turned into a warzone, however, many families celebrate the festival in their own house and enjoy the company of their family members. If you get the luck to join a family on this day, don’t miss it!