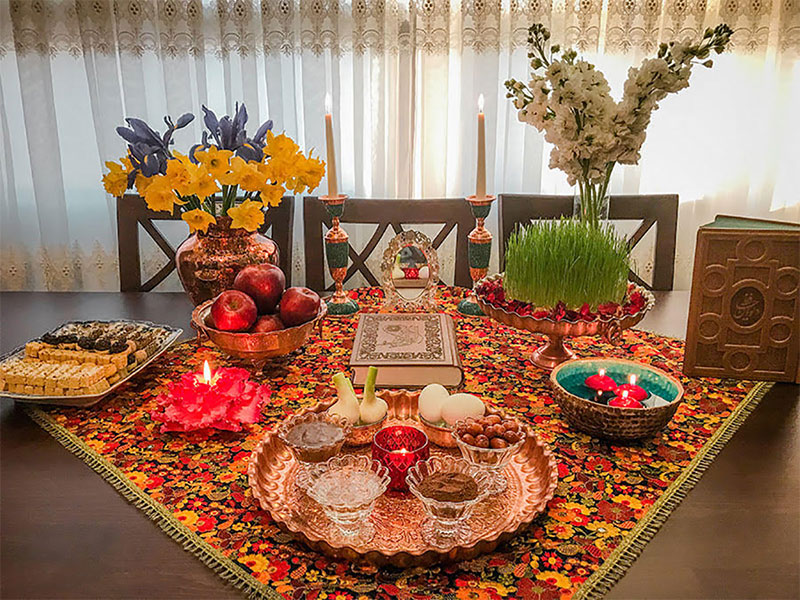 As the blossoms appear and the sweet scent of flowers spread around, you know the spring is here. With the arrival of Spring, a whole new year begins in Iran. A new season, a new day, and a new beginning. Nowruz is a welcome celebration for spring’s arrival. One of the oldest and the most valuable customs held in Iran.

What Is Nowruz and Why Is It Celebrated?

The word Nowruz is a Persian equivalent for New Day. Another name used for the new year. Nowruz is one of the most ancient Iranian holidays ever since Iran’s past eras. When the sun passes through the equator of the earth and heads to the north of the sky, the new year officially begins. By way of explanation, this event is the beginning of the Spring season. And Nowruz celebration and its activities represent rebirth and the link between humans and nature.

Throughout the Sassanid era, Nowruz was considered the national holiday of all Iranians. For this reason, even people who lived in Iran but did not follow the Zoroastrian religion would participate in it.

In Iran, the ritual of death and revival of Siavash (a legendary Iranian prince from the earliest days of the Iranian Empire) is associated with Nowruz. In this way, a few days before the Nowruz holiday, they would sit in mourning for Siavash, and by the time the spring season arrived, they would celebrate Nowruz as if Siavash is back alive.

The famous king Jamshid Pishdadi has been mentioned as the founder of this celebration. The Aryans who entered the region brought themes such as the Farvahar symbol and the return of spirits. They gradually blended in their religion with previous common beliefs in Iran.

How Is Nowruz Celebrated?

Shortly before Nowruz, Iranians start cleaning their houses and sweep away the dust from their belongings. The result of all this cleanliness and freshness from this custom represents the purity of people’s hearts. It is also farewell to the past year and welcoming the upcoming year.

Another tradition is growing wheat, barley, mung bean, or lentil sprouts in a dish, which symbolizes rebirth, and is supposed to be done ten or fifteen days until Nowruz. In Shiraz, a container made of copper or zinc is usually used for this purpose, and then some seeds are named after family members, individually.

As the final days of the year approaches, people start to set the table for the upcoming year. The Haft-seen table usually is set in the main room of the house. The name Haft-seen means seven words starting with the letter ‘S’ in Persian.

The famous Haft-seen pieces that need to be prepared for Nowruz are sumac, garlic, dried oleaster, wheat pudding, vinegar, and coins. Alongside the green sprouts, the last needed touch of the table. Each of these elements represents a beautiful meaning based on the aspect of life.
Besides the seven items, golden fish, candles, colored eggs, mirrors, and Quran also have a place on the table.

As the new year begins, everyone in the house should be at the table in their brand new clothes until the new year arrives. Gathering together and reading Hafez’s poems are other ancient Iranian traditions; The younger ones visit the older ones in their family and receive gifts from them to increase their daily blessings. And the older ones, in response to the kindness of the younger ones, visit their house and have conversations while they eat sweets and nuts.

What Food Do Iranians Eat for Nowruz?

The traditional Nowruz meal is nearly everyone’s favorite; Sabzi Polo Mahi (rice mixed with herbs and served with white fish), Ash Reshteh (a thick green soup with noodles, chickpeas, and beans), and finally Kuku Sabzi (vegetable patties).
Pastries include Baklava, mulberry, chickpea cookies with pistachio, Nuts mixed with dried berries, and raisins are all a must for the New year celebration, especially if there are lots of visitors coming over to the house to taste all these delicious foods.

As the last days of the year approaches, the Nowruz shopping market incredibly increases and gets crowded due to the tradition of wearing brand new clothes for the upcoming year. The old Tajrish Bazaar in the north of Tehran is also one of the places that welcome Nowruz buyers every year. If you visit Iran during this occasion, you will see a specific figure everywhere, just like Sauna Clause!

Haji Firuz, the Iranian version of Santa, is a fictional figure in Iranian myth. According to the stories, he appears annually at the beginning of the spring season to mark the beginning of Nowruz, the Iranian New Year.
Haji Firuz’s face is covered in soot, and he dresses in bright red clothes beside a felt-looking hat. He dances around the streets, singing happily while playing tambourine among people.