Meymand Village, Living in heart of the rocks! 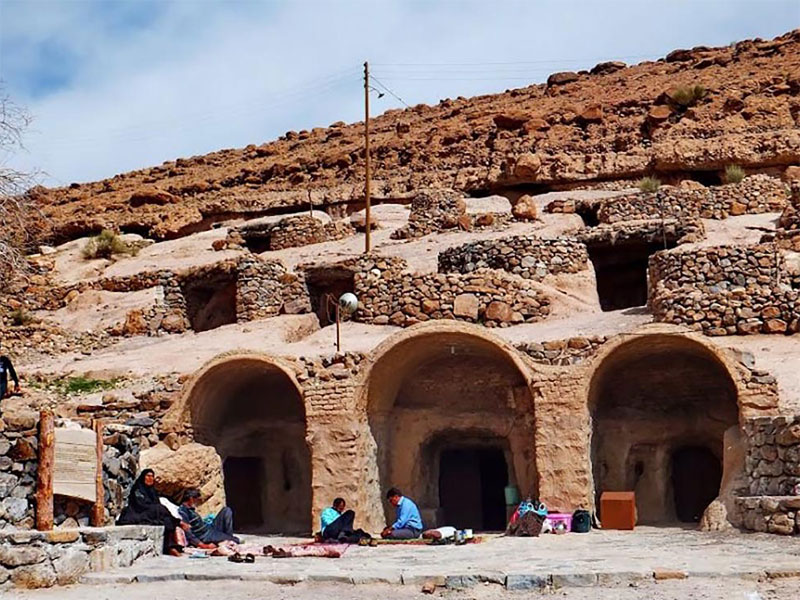 In every corner of Iran, there are villages that have attracted the attention of the Iranians and tourists due to having prominent features. Kerman province is no exception to this rule and has introduced one of its amazing villages to the world. Meymand village is one of those eye-catching unique villages that would take thousands of words to describe due to the age and style of its houses and other interesting features. Meymand attracts many tourists every year, let’s dive into the text and know more about this amazing village!

Where is Meymand village?

Meymand village is located in Babak city of Kerman province at an altitude of 2240 meters above sea level. This village is about 38 km away from Babak city. Meymand is close to Shahr-e Babak, Anar, Rafsanjan, and Sirjan, and most of the travelers who visit it have stayed in one of the major cities around. The area of the village is about 420 km. This village is also known as “Dastkand” (handmade) due to the presence of many rocks in its mountains that have been dug by humans.

What does Meymand mean?

Meymand consists of two words may meaning (wine in Persian) and mand (drunk in Persian). The villagers tell different stories for this naming. According to heart-to-heart stories, the villagers used to begin digging holes in the rock after drinking and getting drunk. But some people believe that Meymand means Meymant. In the meantime, some say: the people of Meymand in Fars province have moved to this place in the past and for this reason, they have named this place Meymand. However, the third hypothesis is a burnt hypothesis due to the history and antiquity of Meymand village and considering the migration of the first inhabitants of the village.

According to the Deputy Minister of Cultural Heritage Research, the age of this village is about 2 to 3 thousand years. However, this antiquity has been estimated by examining the pottery found in Meymand Fortress. Considering the fact that about twenty years ago an archaeologist estimated the age of this village at 12,000 years, researchers are still studying the artifacts left in this village to determine a more accurate date for the age of Meymand village.
Archaeologists who studied Meymand 20 years ago have estimated some of the paintings and pottery to be 6,000 to 10,000 years old. What is very interesting in this village is the defensive fortifications of this area. The same defense capability based on the style of construction of the village has caused Meymand to be protected from serious attacks by enemies throughout history, and consequently social and cultural changes are hardly evident. Meymand village is in fact an ancient region that has historical monuments such as temples, scattered rock houses, towers, and castles in its heart. 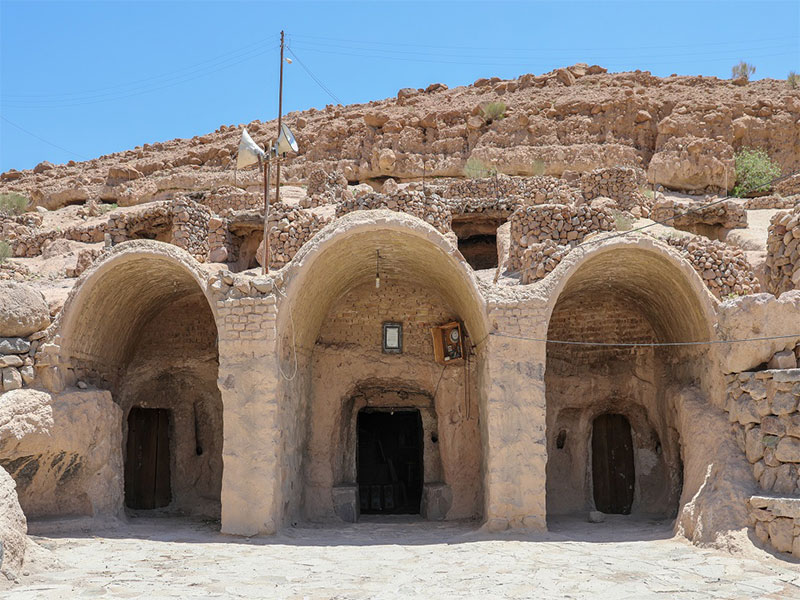 A typical home dug in the heart of the cliffs in Meymand Village.

It is not known yet which people and ethnic group the village of Meymand was ousted from. It is not even clear what caused this kind of house-building in the heart of the cliffs. However, there are speculations about Meymand, and knowing each of them is not without merit.
One opinion about Meymand is village belongs to the 7th or 8th century BC. This period coincides with the reign of the Medes. Rock architecture had been dominant during the Medes’ era for constructing buildings in the western part of Iran. So, it can be said that the people of Meymand were a group of Aryan tribes. However, considering the spread of sectarianism in Iran and in these centuries, it is possible that these people were not Aryans but like the Aryans were followers of sectarianism. In this ritual, immortality and invincibility were considered a very important pillar that has caused the high sanctity of the mountains due to their strength and stability in worship. Rock architecture has also been the crystallization part of the cult of love.

Another opinion is that the Meymand region belongs to the 2nd and 3rd centuries AD. This period coincides with the presence of the Parthian dynasty in Iran. During this period, the nomadic tribes of Kerman, who migrated to different places since the Parthian dynasty, chose monogamy after getting settled in good weather. Considering the remnants that indicate the existence of a fortress in Meymand and the tombs that were built for the burial of the deads, this theory seems to be closer to reality. The similarity of the type of burial of the deads and cemeteries to the Sassanid era also makes the second hypothesis more valid.

Highlights of Meymand are uncountable!

What attracts a lot of attention about Meymand is the structure and shape of the houses. No mortar was used in the construction of these houses. They have dug houses in the heart of mountains and cliffs, with no need for soil, water, bricks, and mortar.
In each room, a niche has been dug to place various items on it. In this type of architecture, the names of the houses are called “Kicheh”. The kiosks consist of one to several rooms and have stables. Each house has a common entrance to which the rooms are connected. The shape and structure of the keys are different and their size is also different. The rooms are separated from the closet by curtains. Room temperatures are always about five degrees warmer than the outside temperatures. The stoves are inside the rooms, and the color of the ceilings and walls of the rooms has turned black due to the burning of firewood in the stoves.
It is interesting to know that the presence of fire and food preparation in the room has caused their insulation and this has increased the life of the rooms. Rooms, where fire has not been lit for several years, have seen roofs fall to the ground. The largest Kicheh in Meymand is about ninety meters and most rooms have an area of about 12 meters.
There are about 405 kiosks in Meymand village with a total of 2560 rooms. The dialect of the villagers is still enriched with Sassanid Pahlavi words. The interaction between man and nature is still considered weird and not allowed as ancient traditions have been preserved. Also, the occupation of the people of Meymand village is agriculture and animal husbandry.
Meymand village of Babak city has been registered as the 19th world monument of Iran in the UNESCO list of antiquities in 2015.

The region is unique

Spring is the best time to visit Meymand village. However, many travelers go to this village in the summer. There are many beauties in this village during autumn, but the weather will be a little dry and tough.

Attractions such as the Rageh Strait, the Gyudri River, the Twin Glacier, the left wind turbine of Sirjan, the stone garden, and the house of Haj Agha Ali, which is the largest brick house in the world, are not far from Meymand village. To travel to any of these, you have to travel between one to two hours. You can include visiting Meymand village in your travel itinerary to Kerman. Choose a cheap Kerman guesthouse as your accommodation and travel to Meymand village and other scenic areas around Kerman.
Therefore, Meymand village, with its antiquity and longevity, will once again remind of the civilization, culture, and glory of Iran. The glory that belongs to the entire history of human life on earth. Hopefully, this strange surprise will continue and the lesson of endurance and resistance against hurricanes will always be repeated.

For more information, please contact our experts, we are always here to answer all your questions and provide your travel requests.