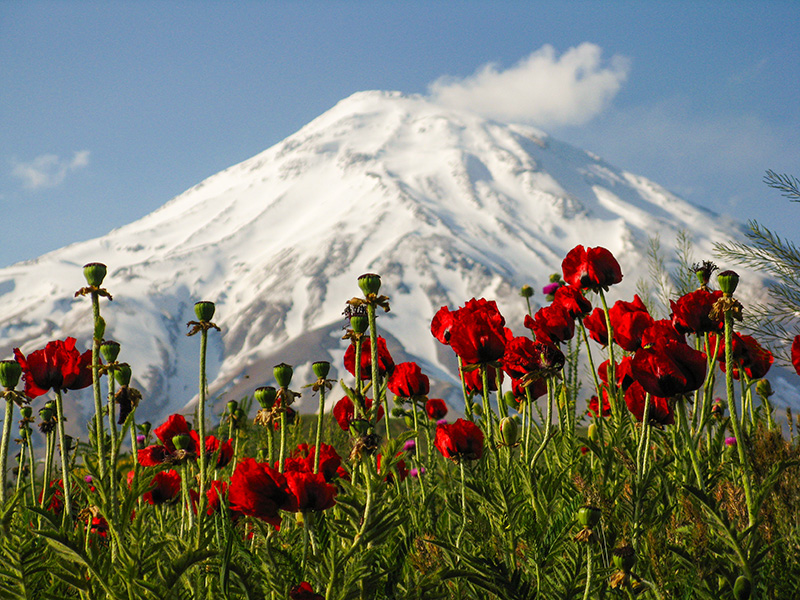 Are you among those who constantly look for exciting challenges in your life? Then mountain climbing would probably be your favorite type of adventure with ups and downs that parallels real life. It is interesting to know that Iran is among the top mountainous countries offering high peaks for adventurers. Stick with us to know more about the best summer mountain climbing destinations in Iran.

let’s eat that big frog and Start from the highest peak of Iran! Damavand is one of the national symbols of Iran, which has had a sacred place among the people since ancient times and its name is heard in many mythological stories. Including the mythical story of Zahak and Fereydoun in which the dictator Zahak Shah is imprisoned in Damavand Mountain. Some residents near the mountain still believe that sometimes they hear the whimpers of Zahak.In spring and summer, the slopes of Damavand peak are covered with a lot of medicinal plants and red anemones. Damavand is a volcanic mountain with a volcano that is semi-active. The presence of sulfur and hot springs in the southeast of the mountain, as well as the eruption of sulfur gases, are signs of this activity. Damavand Peak can be climbed from the three routes of the southern, the northern, and the northeastern route. The southern route is one of the oldest and easiest routes to climb and access through Plour and Rineh. Unfortunately, the Southern route in recent years is being destroyed due to the inefficient movement of mountaineers and the large volume of human waste. There are shelters along the route that are equipped with toilets and a place for mountaineers to rest, and tents can be pitched around them. These shelters are very crowded during the ascent months, and their accommodation must be booked on the Mountaineering Federation’s website a month in advance. The Rineh camp is the first shelter on the southern route at an hauteur of about 2,000 meters. About 1000 meters above the Masjed and Gusfand Sara is the next refuge. There are mules in this place that you can carry your extra cargo with them. The third shelter is located at an altitude of about 4,000 meters and is known as the third shelter. Most climbers live in or around the shelter. 50 meters above the third court, Damavand Mountaineering Complex is the last refuge of the Southern Front. After passing the sulfur hill and inhaling its unpleasant smell, you can feel the taste of approaching the roof of Iran in your whole being. On the summit, the frozen carcass of a sheep and goat is a well-known symbol for the peak, which is, unfortunately, being destroyed. The reason for the animals’ arrival at Damavand Peak and their death is not clear, but some believe the carcasses belong to a herd that went missing several years ago in Storm and froze there, becoming a symbol of Damavand Peak and climbers usually take photos with these carcasses as a souvenir. If you’re into climbing Damavand read the full article about climbing mount Damavand.

Damavand, the mythical mount of Iran.

Not as high as Damavand but even more technical. If you are not going to freak out I should mention that Alam Kuh is actually the most technical mountain in Iran, and if it is not enough yet, how about a 700n meters rock climbing route? Rock climbing is not the only way to reach the peak. There are three other routes. You will absolutely check the necessary requirements with your local guide, but bear in mind to bring your gore-tex and polar cloths + your individual ropes. This troublesome mountain is located in an area called Takht-e Soleiman (The throne of Soloman). The local people in this region believe that Soleiman once has been on the top of Alamkuh and a snake tried to bite him, he curses the poor snake to turn into stone, Nice try to justify the presence of that strange-shaped stone on the top! Every year, many climbers travel to Kelardasht and Rudbarak to climb this high peak and start their ascent from this village. For not getting surprised there, keep in mind that you’re going to face Glaciers melting in summer. During the warm seasons, the upper parts of these glaciers gradually melt and form grooves on the surface of the glaciers. The movement of Alam Kooh glaciers can be compared to the fall of Bahman, with the difference that Bahman falls quickly and suddenly, but the glaciers fall very slowly. After the end of the summer season and the onset of the cold season, the glaciers stop moving and the process of forming new ice masses begins again.

The climbing wall of Alamkuh.

Asking for the most beautiful peak? your answer would definitely be Sabalan. This great Mountain has three famous peaks in general, The big peak is known as Sultan, the other two peaks are known as Pyramid and Kasra. At an hauteur of about 4,800 meters, at the volcanic crater of Sultan Sabalan Peak (the local pronunciation of Sultan Savalan), there is a lake that is about 40 meters deep. The temperature of the lake in the warm months is about zero degrees Celsius and they freeze in other seasons, and the southern part of the lake is covered with snow and ice almost all year round. On the western front of Sultan Peak, next to the hut, there is an eagle-shaped stone that has become a symbol of Sabalan over time. This piece of stone is in the shape of an eagle that sits and turns its head to the east. Given that this area will have cold nights even on summer days, we suggest you take warm clothes including the base layer, polar coat, leather jacket, and gore-tex cloths. If your climbing duration will include the night stay, carry an attack bag to use for climbing.

Sabalan, The most beautiful peak in Iran.

Climbing Azad Kooh is not a technical task and you do not need to use technical equipment when climbing in summer. In general, there are four routes to climb Azad Kooh Mountain. The northeast route is the most common and the closest route to the summit starts from the Kalk Bala village can be done in 1 or 2 days. The southwest route which is the longest starts from the Nahiyeh village and takes at least 2 days.  The northern route starts from Nasan village and takes about 2 days.

Azad kooh, in the green plains of Mazandaran.

In fact, there are seven sub-routes to climb Tochal Peak, the most attractive and common of which is the Darband-Shir Pella route. The area is rich in flora, but animal species are less seen due to the permanent presence of climbers. Some mammals such as rams and ewes, wolves, foxes, rabbits, and birds such as the Eurasian eagle-owl or Caspian snowcock can rarely be seen in the highlands of this region.

The Tochal peak is the most climbed peak in Iran because of being close to Tehran.

Regarding the appellation, it is said that a person is buried in that mountain, whose name was “Arvand” and the mountain was named after him and later changed to “Alvand”.